A Taste of Armageddon, which aired 23 February, 1967, shows Kirk (William Shatner) violating the Prime Directive again, for the betterment of a society. Written by Gene L. Coon and Robert Hamner, who came up with the story, the Enterprise arrives at Eminiar 7 on a diplomatic mission.

The planet’s inhabitants have warned them off, but aboard ship, Ambassador Fox (Gene Lyons), who has command of the mission, orders the Enterprise in.

When they learn the planet is embroiled in a war with a neighbouring planet, a war that has lasted for over 500 years, they are confused by the lack of destruction, and the ease with which the people live with the constant threat of attack.

Things go from bad to worse when the Enterprise is declared destroyed in battle. Kirk, and Spock (Leonard Nimoy), along with the landing party, are being held prisoner until the crew begins to beam down to be disintegrated. Aboard ship, Scotty (James Doohan) and McCoy (DeForest Kelley) try to figure out how to best help their friends.

The war is nice and clean, it’s waged mathematically by computers. If an area is reported as attacked or destroyed, those who live in that area are expected to report for termination.  learn that the war is being waged by computers, with the appropriate casualties reporting for termination.

The people are spared the true horrors of war, and Kirk sees that as wrong. He’s going to show them how terrible it truly is, and maybe, because of it, the two planets can find peace.

This one thoroughly engaged me as a child, Kirk gets to run around and blast things, Scotty and McCoy get to be knocked around the bridge when they are assaulted. There are some exciting moments in this story, even to a young viewer.

Now, watching the episode, I can see commentaries on the way war is conducted, and it’s even more relevant now, with remote drone strikes, missile launches, and fire and forget weaponry. Even watching it via television serves to distance one from war, no matter how graphic the images are. Unless thrust into the reality and physicality of it, one can never know the true horrors of war.

What does it matter if they are just numbers on a screen? People have no context for numbers of that size. The reality is the blood, pain and loss that tears civilisation apart as surely as it destroys families and loved ones.

That is what Kirk wants to show the warring people in this episode, they’ve lived with computers telling them what to do for so long, living peacefully with the concept of killing themselves if they are declared victims, he wants to show them that war isn’t neat and painless.

With nothing to lose the people have no reason to work towards peace, but when real destruction closes on them, peace may be the only hope they have left.

This one is a solid and relevant story. So good.

This Side of Paradise aired on 2 March, 1967 and was penned by D.C. Fontana and Jerry Sohl.

Not to speak ill of the episode, because on a solo viewing it is very good, but this one seemed to be the one that I came across most often growing up on repeats, and I simply grew tired of it, because it doesn’t have big action beats, or cool starship things.

Sure there is the confrontation between Kirk and Spock (who actually gets to smile and laugh in the episode), but as a child, this one would only entertain me so many times.

The Enterprise arrives at Omicron Ceti III expecting to find the ruins of a colony that has been exposed to dangerous berthold rays. Upon arriving not only do they find the colonists still alive, but in better shape than they have ever been.

We also discover a young woman, Leila Kalomi (Jill Ireland) who knew Spock long ago, and had fallen in love with him. She wants him to stay,  and be with her.

She, like the colonists, has survived by being infected by the influence of a local plant’s spores, that allows them to stay healthy, vibrant, and care free.

Slowly, one after another, the crew succumbs to the spores, even Kirk, but he comes around, through anger, and realises the key to saving his crew and ship.

The episode does get to let a number of characters have their moments. McCoy gets to foster his old country doctor routine, and Spock lets out his emotional side, and then because of how things play out, loses the most by episode’s end – happiness and love. Spock has a number of poignant moments, throughout the episode, but the fist scene after he’s purged the spores and speaks to Leila via communicator… even Kirk realises what his Vulcan friend has lost.

But the spores take away the need for challenge, ambition the willingness to dream of something more, Kirk says it best “Man stagnates if he has no ambition, no desire to be more than he is.”

It presents the idea that maybe, just maybe, we aren’t meant to be perpetually happy. We need to be a driven species, always striving for more, exploring, learning, understanding, and to take our joy from our successes and goals.

I think I enjoy this one now much more than I did as a kid. I see the things at work here, and understand them much better.

I am loving these stories, and it’s amazing how strongly some of them have endured. 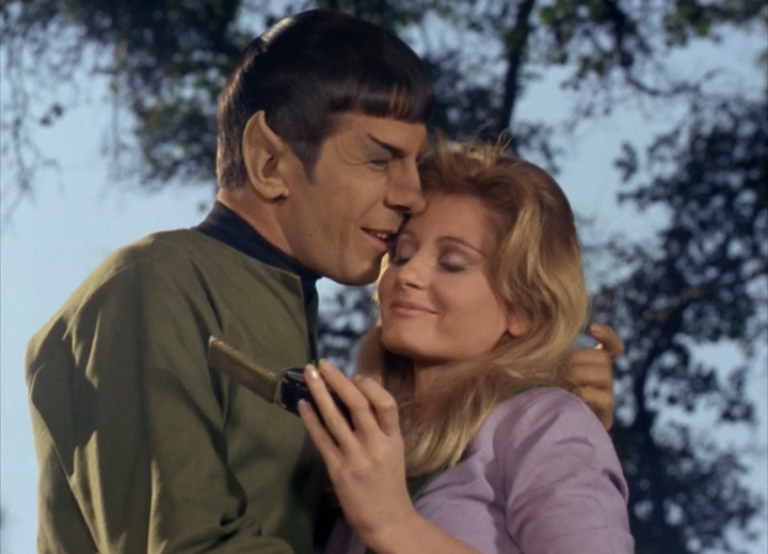