Rod Serling’s Twilight Zone is one of those television titles that surpassed its small screen trappings to become something more, something bigger, iconic, finding its way into the very fabric of the cultural DNA. Even today, people make references to it, by humming the iconic opening theme by Marius Constant, (though Bernard Herrmann composed a darker, more troubling theme for the first season), when something strange or weird happens to them.

You know you’ve made it when RUSH writes a song about you.

Running for five seasons, starting in 1959, The Twilight Zone changed anthology storytelling on television by challenging us with (at the time) new concepts, surprising us with startling twists, and putting familiar faces into extraordinary situations.  For 156 episodes, Serling brought his tales of science fiction and horror into living rooms around the globe, amazing and terrifying viewers.

And now, just in time for the holidays (a perfect gift for those genre fans on your list), Paramount has released the complete series in a brand new edition. All five seasons, spanning 24 discs, are available in one set.

Not only are all the episodes here, but the supplemental material for each are amazing. There are commentaries, original sponsor ads, as well as radio dramas which were recorded with some very familiar names. Each episode has a bevy of features, and Paramount has pulled out all the stops to make this the most comprehensive collection for this series as they can. It’s everything I would want in a blu-ray collection.

The picture and the sound are both fantastic (remember the show is almost sixty years old), and there’s something wonderfully enchanting about watching these black and white images play out across the screen, and then realize as the episode ends that you had become engrossed, mentally and emotionally with the story taking place before you. It’s magic. 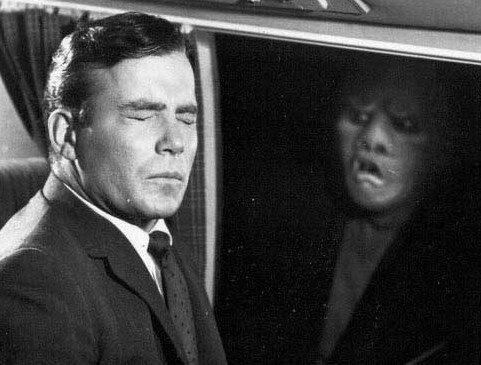 Admittedly, not all the stories are winners (and not all of them have a surprise twist or reveal at the end, which became a bit of trademark of the series). But more often than not, they feature some incredibly strong writing (boy, could Serling turn a phrase) and standout performances by some fantastic actors – William Shatner, Robert Duvall, Carol Burnett, Dennis Hopper, Burgess Meredith, Robert Redford, Martin Landau, George Takei, Roddy McDowall, the list goes on and on, and that was because of the appeal of the writing.

Anthology series don’t always work on television, but when they are as well-crafted as the Zone, you can’t help but attract talent.

That combination of incredible storytelling, and wonderful performers bringing those stories to life, have helped to make the show endure. Here we are 57 years after the series began, and we still talk about it, we still love it, and it is still a part of our culture.

I remember a couple of my first encounters with the Zone. The first was with the feature film, which introduced me to the world – and one of my favorite stories (imagine my surprise to learn that Shatner was in the original version), but I remember (I was young) that the line and reveal “Wanna see something really scary?” freaked me out.

The other memory I have, came a little later on, when the reimagined anthology series aired in the 80s. It was a story written by Stephen King, called Gramma, and I couldn’t even finish watching it (I couldn’t handle my horror when I was younger).

But both of those experiences shows the effect that first series had on the generations that came after it. There were tales to frighten and stories to awe, and now, as I gear up to dig through one episode after another, I am filled with a giddy excitement.

Join us every Tuesday, starting January 3, 2017 as I work my way through the series. There’s the signpost up ahead… next stop, The Twilight Zone!