The final story of the celebratory 20th season is up this week with The King’s Demons, a two-parter penned by Terence Dudley which aired 15 and 16 of March, 1983.

The Doctor (Davison) confronts The Master (Anthony Ainley) in 13th century England, with the historical personage of King John (Gerald Flood) and the upcoming signing of the Magna Carta serving as a backdrop for the tale.

The Doctor, Teagan (Janet Fielding) and Turlough (Mark Strickson) arrive in time for a joust, and the King proclaims them his demons after their bizarre arrival, and appearance. But when a page arrives from London, having just left the King’s side, suspicion is thrown on who, or what, the King attending the joust may be, and what plans are at work behind the scenes.

The King is completely unfazed by the appearance of the TARDIS and the Time Lord, so that piques the Doctor’s interest, and from there the story moves fairly quickly, and it’s nice to have a short story for a change, there is nothing dragged out.

The Doctor suspects something is wrong right from the off, as he knows the date, and where the King should actually be. He discovers the Master, and that the King has been replaced with a robotic being known as Kamelion. 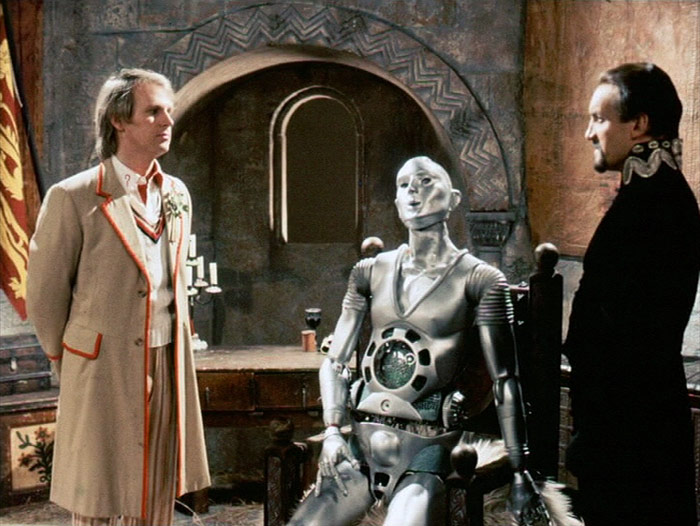 With little to no help from both Turlough and Teagan, the Doctor confronts the Master, finds his nemesis’ TARDIS, and resolves everything… much quicker than usual.

Kamelion, it seems, can be controlled by thought, though it is self-aware. And since he is currently posing as the King, and matters to the Master’s plan, the two Time Lords duel for control of the being. When the Doctor triumphs, and wins the day, Kamelion joins the triumphant Time Lord in the TARDIS, while the Master escapes.

It’s the first, mostly historical tale in a while, and the Doctor even gets some fencing in! What I don’t really get is, if Teagan chose to travel with the Doctor this time, then why does she always seem to be so cranky? All these things she gets to see, and she’s just so surly.

So of course, the Doctor suggests taking her home. And I cheered, I thought maybe she was leaving, especially seeing as she doesn’t really seem to like Kamelion… perfect time for her to leave then. But nope, then she started complaining that she didn’t want to go… sigh.

This one wasn’t the best story, though I do like a shorter one, and it almost felt like a complete waste of an appearance in terms of the Master. Oh well, next time, the perfect topper to the anniversary, a giant adventure, The Five Doctors! 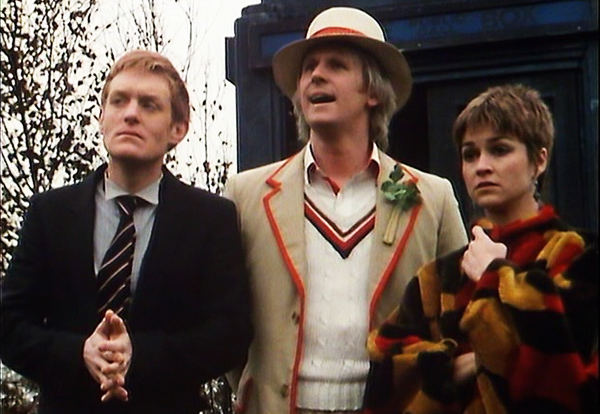