The first epic season of Warner Brother’s fantastic animated series comes to a close this week.

We pick up from last week’s post, with the conclusion of The Demon’s Quest, which aired on 4 May, 1993.  Talia’s (Helen Slater) life hangs in the balance as it opens and Batman (Kevin Conroy) must confront Ra’s Al Ghul (David Warner), who has a plan to destroy the Earth. With Robin (Loren Lester) at his side, the Caped Crusader takes on the Head of the Demon, and put a stop to his foul plan.

The Dark Knight must face a revitalized Ra’s as the Lazarus Pit has revived him, and restored his strength and cunning. He rebuffs Ra’s offer of Talia as his wife, and to assume the role and position of the Demon’s Head.

Bruce and Dick track Ra’s to his desert stronghold, where a final confrontation takes place, as Batman infiltrate the Demon’s fortress.

This ends up being a fairly solid tale, but we’ve come to expect that from this series, and the international scope of this episode makes for another enjoyable escape from Gotham. It’s a great episode, based on the classic comic, and showcases two of the most interesting supporting characters in the Batman universe, Ra’s (who since Batman Begins is more well known) and his daughter Talia, and her relationship with Bruce.

Read My Lips is next up, introducing an insane ventriloquist, Arnold Wesker (George Dzunda), and his dummy, Scarface (also Dzunda), as they carve out a life of crime for them in Gotham.

This one aired 10 May, 1993, and introduced the two unified characters that once again prove how interesting Batman’s Rogues’ Gallery is. Wesker always seems so upset, and put off by the violence Scarface commits, and one must wonder how split his mental facilities are, and how many personalities he contains.

Batman doesn’t have much time to pontificate on that as he races to stop the dummy and his operator before their crime wave completely overruns Gotham. Bats is shocked to see who he is going up against, and must find a way to get answers from Wesker who has truly shut his mind off from operating his dummy, or separate them once and for all.

As Batman tracks him down, Shirley Walker’s incredible score takes center stage as we get some wonderful riffs on Danny Elfman’s Batman theme, as well as her own themes that have expanded on the universe. She has done some amazing work for the series, and this one, I think is amongst her best. 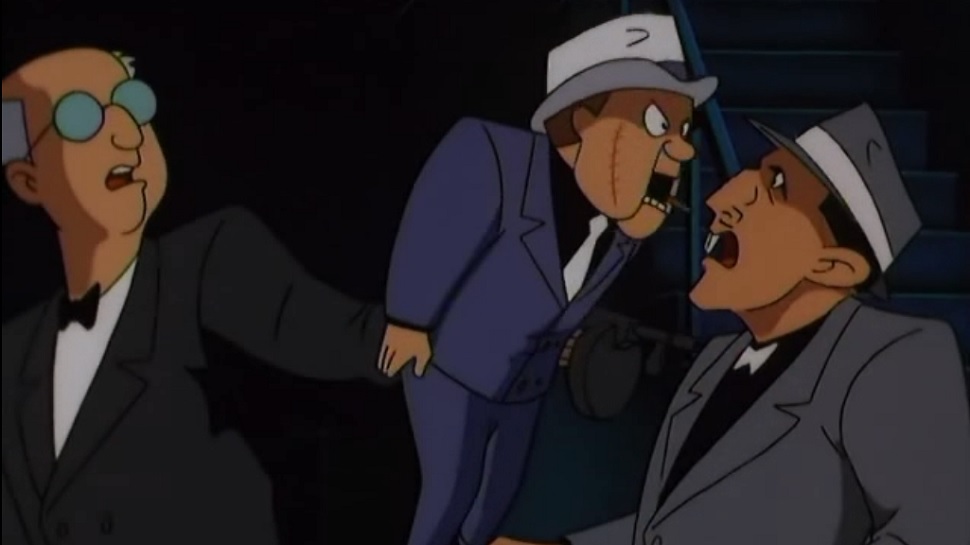 The final episode of the season is Fire From Olympus, which aired 24 May, 1993.

Maxwell Zeus (Steve Susskind) has stolen an energy weapon from the army, giving him powers akin to those of the Greek God Zeus, whom Maxie begins to believe he is. He plans to use the weapon to destroy Gotham.

Batman tracks down the missing weapon to Maxwell’s shipping business, and investigates Zeus, who has completely succumbed to the delusion that he is in fact Zeus.

His personal assistant, Clio (Bess Armstrong) is much put upon, and while worried about her boss’ condition can’t quite figure out how to deal with him. Which means that Batman is the only one standing between Maxwell and Gotham’s destruction.

As we close in on the climax of the story, Batman must face the traps and pitfalls of Zeus’ giant building, working his way to the top floor, made over to look like Mount Olympus, and a final confrontation with Zeus.

A solid episode, but nowhere near as captivating as the previous episodes this week.

Next time, it’s on to season 2, same Bat-Time, same Bat-Channel!