Julia Louis-Dreyfus returns as Selina Meyer, now interim president, while also trying to run her own campaign for the presidency in the latest season of Veep, being released to DVD and Blu-Ray today from HBO.

The Emmy Winning comedy , Outstanding Comedy, as well as awards for Louis-Dreyfus each season, continues to bring a hysterical look at the White House and the political process of America.

There are some brilliant moments throughout the run, with great character bits, and it has a great season finale, setting up the new season, which returns on the 24th.

But if you haven’t seen it, then now is the perfect time to catch up, with razor-sharp writing that both dramatizes and skewers the political process, as well as the relationships of those involved in it, this is the time to catch up.

The writing is top-notch, and each character has their moments, but Louis-Dreyfus is the shining star at the center of the series, and she carries it with ease, delivering sardonic and sarcastic lines one moment, and then lamenting the loss of a super delegate the next. 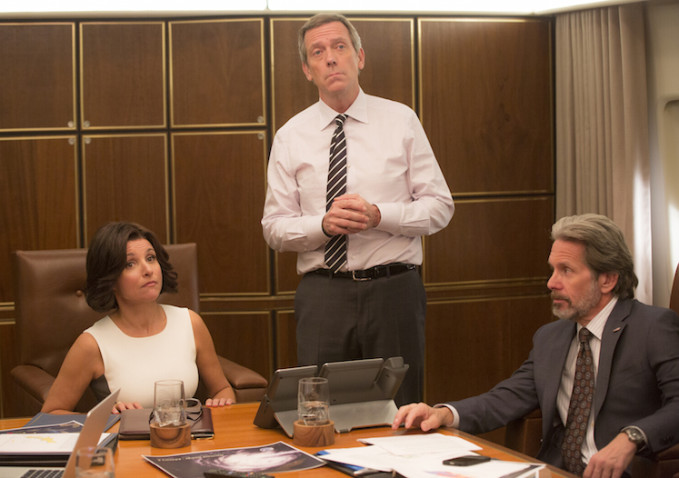 It’s a well-crafted series that plays withing the rules of the American political system, and finds the comedy in it, and the cast is perfectly realized to know it out of the park, each and every episode.

This is one of the series that I’ve grown to enjoy, it fills my West Wing needs, and the sharp, rapid-fire, dry comedy elicits in each and every episode.

The addition of Laurie and Bader to the regular series cast make this season resonate, as Laurie comes on as Meyer’s potential vice president, Tom James, who proves to be more likable with the voting public than Meyer, and causes some tension on the election trail, as Meyer tries to keep him in check, but as things play out, trouble for the party may be on the horizon.

I think my only real problem with the series is that it is too short, running only 10 episodes, at about half an hour each. I definitely want more!

Veep, season 4, is available from HBO today, and if you’ve missed them, seasons 1 to 3 are out there as well. So catch up, and let’s see what happens to President (?) Meyer in the next season…

Smart and funny, this one is definitely worth a look.