It’s back to Gotham for another trio of episodes! First up is Prophecy of Doom, which aired on 6 October, 1992. This one sees Batman (Kevin Conroy) taking on a con-man, Nostromos (Micheal Des Barres) who is robbing the rich of their money by convincing them that he can see their future, and saves them from life threatening events, which he creates for them.

He is attempting to swindle an old friend of Bruce’s Ethan Clark (William Windom) and his daughter Lisa (Heather Locklear). Ethan lets Bruce know that he is holding a welcoming party for Nostromos and the billionaire playboy is invited and begins his investigation.

Bruce suspects that Nostromos is behind the attempts on his clients’ lives in order to make more money and tries to find a way to prove the man a villain. He learns the prophet is a small time crook and would be actor, but can’t see the endgame yet.

When an attempt is made on Wayne’s life, Bruce pretends to fawn over Nostromos to get into the cult, or Brotherhood, and goes after the criminals, even if he had to fork over ten million to do it. But Nostromos holds Lisa as a hostage, forcing Ethan to sign over all of the Brotherhood’s funds unless Batman can stop the criminals…

The Forgotten aired 8 October, 1992, and sees a different kind of problem for the Dark Knight. While in disguise and investigating the disappearance of  Gotham’s homeless, he is attacked and captured, finding himself in a slave labor camp without a memory of who he is.

The camp is run by Boss Biggis (George Murdock) who is using his laborers, including Bruce’s new friends Salvo (Lorin Dreyfuss) and Dan (Dorian Harewood), to mine gold ore. Biggis is your typical overweight, villainous baddie, a stereotype, so there isn’t much in the way of grey characters in this story.

Even as Bruce digs, he tries to remember who he is. He finds himself doing the right and good thing, no matter what his condition, but haunted by terrifying dreams of his past.

Back in Gotham, Alfred (Efrem Zimbalist Jr.) does some detective work of his own trying to find Bruce, using his own skills and Batman’s gear to augment his search.

Bruce, meanwhile, gets himself into some serious trouble, getting thrown into The Box, before making an escape, with Biggis’ men and dogs in hot pursuit. Will Alfred find Master Bruce in time and will Batman put a stop to Biggis’ plans? 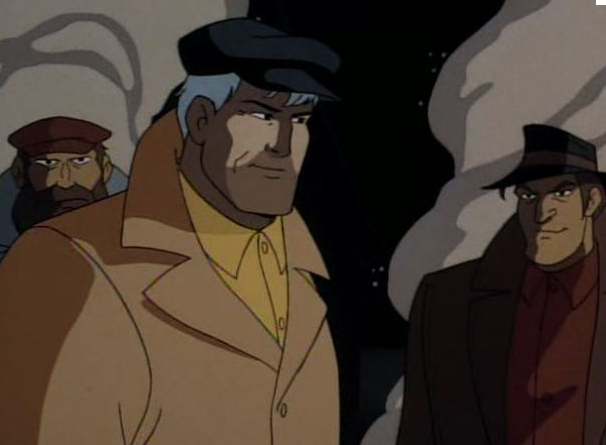 Mad as a Hatter aired on 12 October, 1992 and introduced the Mad Hatter (Roddy McDowall) into Batman’s Rogues Gallery.

Jervis Tetch (McDowall) is a brillaint scientist, with a jealous streak and an obsession with Alice In Wonderland. He uses his work on mind control, and the subsequent devices he’s created to entrance the woman of his dreams, Alice (Kimmy Robertson), who is quite happy with her boyfriend.

When a breakup happens, Tetch sees a chance to woo her, he takes her on the town, using his devices to make for an incredible evening, but when a couple of hoods end up under his control, Batman realizes there is something going on in his city.

But when her fella comes back on the scene and repairs the relationship, Jervis’ jealousy gets the best of him…

Will Batman be able to save Alice?

Loretta Swit also guests as Marcia Cates, one of Wayne Enterprises management team, who is less than impressed with Tetch’s work performance.

This sees the return of the grey shades of villain, Jervis’ heart what his heart wants, and he is driven to actions that make him a villain, simply because he wants to be loved. That added to the wonderful voice talent of McDowall makes for a highly enjoyable episode.