We’re closing in on the end of the Key to Time arc, as this week, we are on the 5th story of the adventure. This four-part tale was penned by Robert Holmes and ran from 23 December, 1978 to 13 January, 1979.

The story itself seems to have overtones of British Imperialism and Expansionism as the Doctor (Baker) and Romana (Mary Tamm) arrive on the swamp moon of Delta Magna in their search for the next piece of the Key.

There is a refinery working on the planet, overseen by the bullying Thawn (Neil McCarthy), who sees his employees as just a step above the sentient life on the planet, a number of tribes, known collectively, and rather derogatorily, as Swampies.

These Swampies detest the refinery crew, and have engaged the services of a gun runner Rohm-Dutt (Glyn Owen), claiming to work for the Sons of Earth, who is willing to outfit them with weapons, but there may be something else going on here…

They also worship a water deity, Kroll, and insist he truly exists, though Romana doesn’t necessarily believe it, after almost being sacrificed to a Swampie posing as the god. But the Doctor, and everyone else soon find out that, yes, the creature does exist, and is of immense size!

There is some discussion amongst Thawn and the others that the Swampies may serve as a working class race, but they have little to no respect for the people’s beliefs, and there are plans at work to contain, and possibly eradicate them, should they prove incapable of serving.

But they don’t count on the fact that apparently Kroll does exist. It’s huge, monstrous, and its tentacles are long and are primed to tear the refinery apart and claim the lives of all of those who live within it.

When Kroll makes its full appearance in the final part of the story, the effects are more than a little iffy. The creature design is, in itself, pretty creepy and cool, but the way it is cut into the story doesn’t work as well as it could. And perhaps, this beast is more than it seems as well, could it in fact be the personification of this segment of the Key?

This season has moved actually pretty quick, and more often than not, the stories actually work really well, there have been some flat moments, and there are more than a few in this story, but for the most part, Baker seems to be really hitting his stride as the Doctor, despite knowing that things weren’t going as smoothly as they could behind the scenes.

There is one more adventure in the Key to Time story as we end Season 16 next week with The Armageddon Factor! 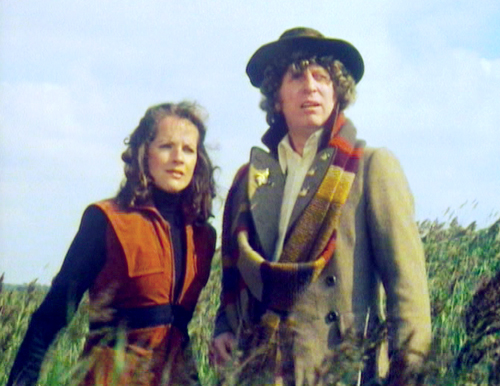