My time with director Jack Arnold continues, thanks to the Sci-Fi Chronicles. This time around, we find ourselves int he middle of the desert menaced by a giant spider. But don’t worry, things work out in the end, and we’re all saved by Clint Eastwood.

Near a small desert town, Professor Gerald Deemer (Leo G. Carroll) is conducting his studies, and experimenting with gigantism, citing the wonders of oversized fruits and vegetables to feed the world. Unfortunately, he’s experimenting on animal and insect life, and possibly even humans… like himself.

After a fire bursts through the lab, a single tarantula, already the size of a chair, escapes the lab (and the professor never tells anyone for some reason, just continues on with his work), and begins to wander aimlessly through the desert.

In the nearby town, ‘Doc’ Matthew Hastings (John Agar) is slowly drawn into Deemer’s world when a strange body is found by the roadside, and Deemer’s new assistant rolls into town, the charming, Stephanie Clayton (Mara Corday).

Reports start coming in about dead cattle, completely eaten but for their skeletons, found near what we learn are giant pools of insect venom, and soon, the incidents start to include the locals as well. It’ll be up to Matt and Stephanie to figure out what is going on, but even after they do, will they be able to find a way to stop the giant arachnid? 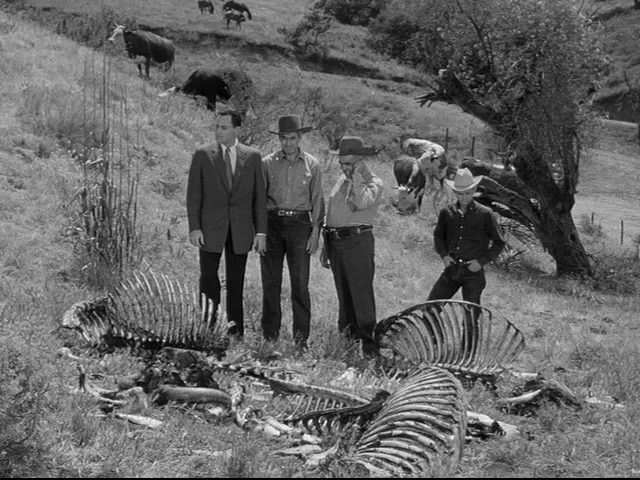 The photography with the spider, most times, works very good, either having it walk across a scaled down set, or super-imposed onto a larger back drop. It’s rather odd that no one sees this thing coming across the flat desert at them until the last possible second, but I’ll let them have that one…

This one ends up being a slow build, and then racing through its climax in the last few moments of the film. I didn’t enjoy this one nearly as much as I did Creature, but it was still fun in its way.

And I wasn’t kidding about Eastwood, he makes a completely uncredited appearance in the last few minutes of the film as a jet fighter pilot called on, alongside his squad, to put down the terrifying tarantula. He’s the one who orders the final attack, and his missiles, and then his napalm burn the creature down, just short of the threatened town.

I will say this for some of these films from the 50s, they take themselves pretty seriously, even when the plots are as goofy and outlandish as this one. And that’s what continues to make these films so much damned fun.

I can’t wait to see what the Chronicles beings me next.

Do you have a fave b-movie from the 50s? 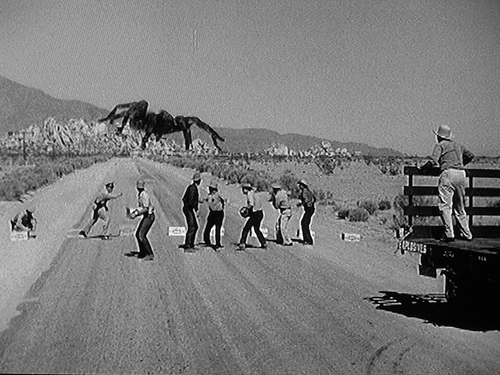