It was a quiet week for me at West End Comics this time, which isn’t a complaint, as there seems to be so many other things going on in my life right now, I wouldn’t be able to give a lot of issues my attention, but 4… I can handle 4! And Kirk had come through again with another Funko figure for my collection, Orphan Black’s Alison Hendrix joins my Helena in my ever growing collection.

But on to the books! 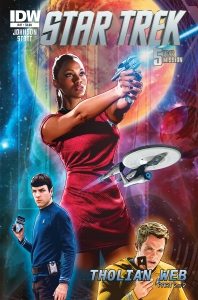 Star Trek (IDW) issue 47 was written by Mark Johnson, with art by Rachael Scott, colours by Davide Mastrolonardo and letters by Robbie Robins. This is The Tholian Webs Part 2 of 2, which finds Kirk, Spock Uhura and Keenser as the only hope for saving the Enterprise as they try to outmaneuver the Tholian webs and the effects of interphase space that seems to be driving the crew to madness, and out and out mutiny! It also may lead to making new enemies, which this universe’s Federation seem to be piling on… there is trouble with the Romulans, the Klingons and now the Tholians. No matter what I think of the movies, and I am off divided on them, though Into Darkness has some serious flaws, and is not really Trek, I’m enjoying these stories with the reworking of familiar stories and characters and also enjoy the fact that this series is taking the time to explore and build on the characters, something that hasn’t really happened in the films yet. 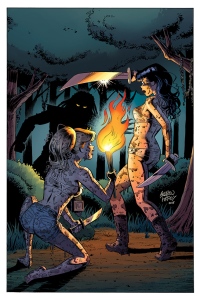 Archie vs. Predator (Dark Horse Comics) issue 4 of 4. This fun little series that perfectly balances both creations, has a story by Alex De Campi, pencils by Fernando Ruiz, inks by Rich Koslowski, colours by Jason Millet and letters by John Workman. With Archie incapacitated by the predator’s attack last ish, the girls drag into the Lodge’s panic room/medical facility, where the computer goes to work on him, while Betty and Veronica gear up to face off against the predator in one final bloody, confrontation that brings this highly enjoyable story to a very satisfying end.

This story wasn’t afraid to make things bloody, disturbing, and actually very funny at the same time, seeing familiar characters get slaughtered by the Predator was both shocking, and laugh out loud funny. I can’t believe how much I enjoyed this series, which is why Kirk probably set aside the next comic for me to have a look at…

Archie vs. Sharknado (Archie Comics) This one shot was written by Anthony C. Ferrante, featuring pencils by Dan Parent, inks Rich Koslowski, letters by Jack Morelli and colours by Andre Szymanowicz and Casey Silver. It seems nothing is safe since this whole Sharknado phenomena started, and at least Archie and company seem to be having fun with it. While Betty and Veronica are sight-seeing in Washington, where Mr. Lodge is presenting an idea to congress, a sharknado hits, and the blood, fins, and monuments start flying!

As the girls try to survive the attack, they know they have to get back to Riverdale to warn and save their friends, and more importantly that make Archie goes to the school dance that night with one of them, and no one else…

Filled with blood, humor and in jokes (the guy in the Amity Island shirt made me laugh out loud), this one was very fun and while I wouldn’t even consider myself a casual Archie fan, I am enjoying a bunch of Archie titles lately… maybe I am becoming a fan…

Star Wars: Kanan the Last Padawan (Marvel Comics) issue 4, the series penultimate issue was written by Greg Weisman with art by Pepe Larraz, colours by David Curiel and letters by Joe Caramagna. I’ve been loving the new Star Wars Marvel comics, and they have yet to let me down.

In this issue Caleb seems to be more desperately on the run than before as he learns the trade of smuggling, and thievery from Kasmir, but is always in danger of the pair of clone troopers that have been on his tale since Order 66, Grey and Styles.

As Caleb learns, he and his now friend, Kasmir stay one step ahead of the clones, always on the run, but sooner or later, they’ll get too close, in fact by issue’s end, it seems that are far to close for comfort.

I’ve been loving this look at Kanan’s life as he changes from padawan to smuggler, but, as I was with the Princess Leia series, I’m upset that it’s coming to an end so quickly. Oh well, something tells me there will be another Star Wars tale to fill its space soon.

So that’s what I got fro West End Comics this week… what did you get?