It’s a big week at West End Comics with a couple new recommendations from Kirk, and a title I had to read, and a continuation of some I’m enjoying. 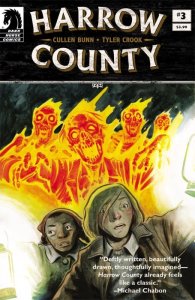 Harrow County (Dark Horse Comics) issue 3, this one continues to be a great book! With a story by Cullen Bunn and arts and letters by Tyler Crook, this comic just gets better and better. Emmy’s journey through the woods with Bernice continues after a troubling encounter with graveyard haints. The skinless boy is never far away from them in the dark, do his best to keep her pursuers off her track, but confrontations are coming, and there are other things in the woods that don’t care if she could be a monster or could be Hester Beck remade. Wonderfully spooky, with an involving story – I am loving this series so far – the art, the creepy factor, and Emmy. I can;t wait to see where the story goes next. There’s just something about this one that feels like a classic ghost story, best heard at a campfire, or read in comic form with a flashlight under the covers… 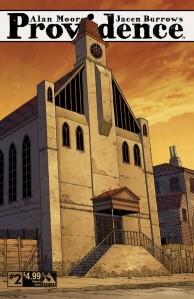 Providence (Avatar Comics) issue 2. The story by Alan Moore continues to grow, though, is typically dense, the journal entry at the end of this issue is huge, including some of the pamphlet that Robert Black picks up in his investigation. There is art by Jacen Burrows, color by Juan Rodriguez and letters by Kurt Hathaway which all help fill out this world we are being plunged into. Black, partnered up momentarily with educated Irish detective Tom Malone, while he runs down a lead on a grimoire mentioned last issue, and encounters terrors, possibly imagined but more likely real in the basement of occultist Suydam. I’m still not fully sure what’s going on here, but I do know that it’s frightening, and hiding under the surface of day-to-day America. 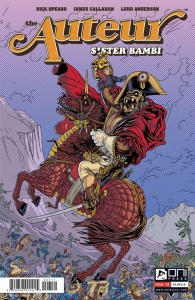 The Auteur: Sister Bambi (Oni Press) issues 1 & 2. Story by Rick Spears, art by James Callahan, colours by Luigi Anderson and letters by Sick Rears. A filmmaker who is on the verge of making an exploitation film is seeking guidance, trying to work with his exec producer and new star, (still not having told his girlfriend she no longer has the lead) who is financing the project after her associates, Nazis hiding in Brazil, were killed by Jewish ninjas. With nods to films both great and small this one is bizarre, hilarious and full of in jokes. And there’s a great visit to an island off Sumatra, that looks very reminiscent of a famous island that was inhabited by an equally famous gorilla.

Bloody, funny, and not afraid to cross, even erase a line or two, this one is a hilarious surprise. 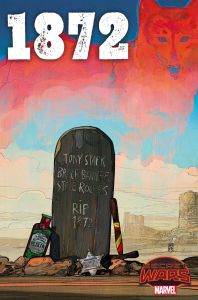 1872 (Marvel Comics) issue 1. Written by Gerry Duggan, art by Nik Virella, colours by Lee Loughridge and letters by Clayton Cowles. This is another in the BattleWorld Marvel titles that are currently making the rounds. Kirk, correctly, assumed that because it featured some of my favourite Avengers characters that I may be interested, especially given its setting, the Wild West in the year 1872… So Deadwood Avengers-style? Kinda. Steve Rogers (Cap) is the local Sheriff, Tony Stark (Iron Man) is the town drunk and inventor, having sworn off firearms and Bruce Banner (Hulk) runs the local apothecary. All of the town, Timely is ruled by the less than friendly Mayor Fisk (Kingpin) who has plenty of cohorts and black hats to cause problems. This could be a lot of fun!

Negative Space (Dark Horse Comics) issue 1. Story by Ryan Lindsay, art by Owen Gieni and letters by Ryan Ferrier. Guy a creative sort is being manipulated, his life controlled, everything around him pushing him to kill himself. Apparently there is something called the Evorah who will destroy humanity if Guy somehow lives. There’s a reveal on the final page, but it doesn’t come as much of a surprise if you’ve seen the cover. Still, the art is gorgeous and I’m a little intrigued by the story… We’re told that a company is selling out humanity one day at a time, but inside we’re told that they have to succeed or the Evorah with take over. So who’s in the right? Who’s in the wrong? What’s really going on here? …and poor Guy 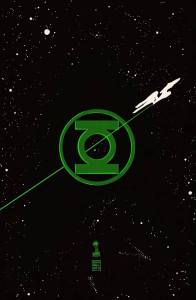 Star Trek/Green Lantern: The Spectrum War (DC Comics/IDW) issue 1. Written by Mike Johnson, art by Angel Hernandez, colours by Alejandro Sanchez and letters by Neil Uyetake. Ok, this just seems like a fun idea. I never wanted the Enterprise to come across someone like Batman or Superman, but Green Lantern makes sense, he’s part of an intergalactic police force (more or less) and sure, there is a temporal and spatial displacement to bring the DC mythos into the realm of Kirk, Spock and the rest of the Enterprise crew, but so far, the story reads really enjoyably. I like that Chang makes an appearance, and I also like that neither Kirk nor Spock are chosen to wear a ring, it will be interesting to see the effects it has on those who are chosen.

The art is great, the story is fun… Buckle up. 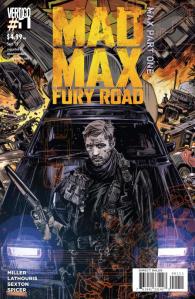 Mad Max Fury Road: Max Part One (Vertigo Comics) issue 1. Story by George Miller with script by Mark Sexton and Nico Lathouris, art by Sexton, colours by Michael Spicer and letters by Clem Robins. This first issue of what is only a two issue series catches us up on what Max has been up to since we last encountered him in Beyond Thunderdome and before Fury Road. Establishing his back story as we’ve seen in the films, Max finds himself entering another Thunderdome, but there are more contestants, and the winner will walk away with a V8 engine. Exactly what Max needs to fix up his hidden Interceptor.

But as usually happens with Max, he pisses off the wrong people, and ends up in more trouble than he planned for, and if he survives, he may owe a huge favor.

I love that Miller came up with the story, I love the back history, it feels like watching the beginning of one of the movies, and there are some familiar images amongst them. A good solid tale, so far… 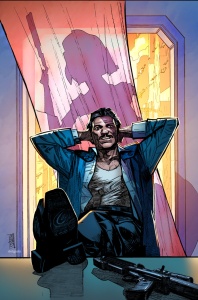 Star Wars: Lando (Marvel Comics) issue 1. Written by Charles Soule, art by Alez Maleev, colours by Paul Mounta and letters by Joe Caramagna this series focuses on that charming rogue, Lando Calrissian. Set between New Hope, and Empire, Lando, much like his pal, Han Solo, is trying to get clear of some incurred debts, and thinks that the theft he has in mind will be enough to get he, and his right-hand man, Lobot, clear.

Unfortunately, it’s not, and Lando is pressured into one last job, or so he tells everyone involved. He, and a team he recruits, break into a space station to steal a pleausure yacht, with the proviso that he and his crew can keep anything inside, but Papa Toren, the gangster, wants the ship itself.

Everything goes well, it seems, with the theft… until the reader finds out whose ship it is. Lando is in big trouble…

Yet another Star Wars title that is expanding the established universe in a fun way, and it looks amazing doing it!

What are you reading? Remember, to swing by West End Comics and find something awesome!