It’s time to spend a little more time with Greta Garbo, following my screening of Anna Karenina for the Great Movies – 100 Years of Film book. The first recommendation comes with a fairly high pedigree, Anna Christie was Garbo’s first sound film, which saw her nominated for an Oscar for Best Actress, and is based on Eugene O’Neill’s Pulitzer Prize winning play.

Garbo plays the titular Anna, who has sent word to her father that she is coming to visit, and perhaps stay a while. Neither has seen the other for 15 years, her father, Chris (George F. Marion), left her when she was five, sending her off to live with a family in the hopes it would lead her to a better life. But unfortunately, neither of them have had the best life, and both have kept their lives secret from the other.

Chris believes that his beloved daughter is working as a nurse, and is smart and well-educated. Anna, in turn, believes that her father works hard as a janitor, an honest, productive living. Neither side has been honest. Arriving at a dockside bar that her father, where her father drinks, a lot, and his lady, Marthy (Marie Dressler), frequent, Anna meets up with the elderly woman first, and both of them rumble who the other one is fairly quickly; same recognizes same after all. Marthy reveals that Anna’s beliefs are wrong, in fact her father is a barge captain, apparently a less than desirable job, because that makes him a sailor.

Still, the two attempt to make a bit of a connection, Anna continuing with the misperception that she’s a bit more higher class than her father, but, is eventually persuaded to travel with him on his barge up the river in the hopes of getting to know one another, and allowing Anna to leave her former life behind, if only for a moment. 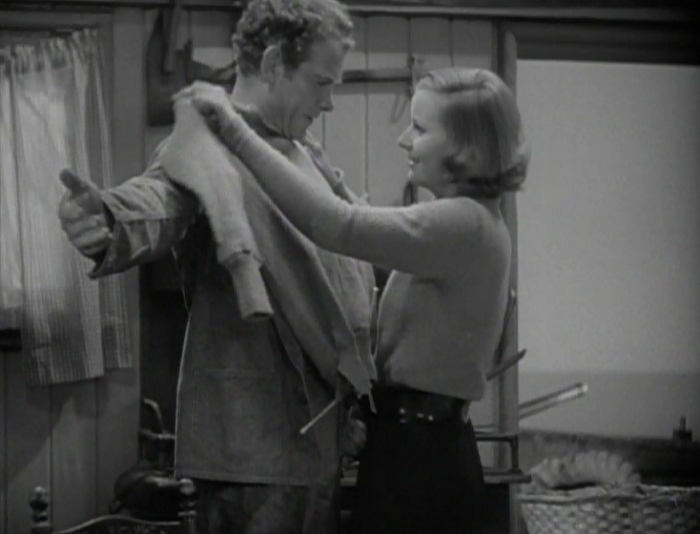 She slowly starts to come around, travelling on the barge with him, enjoying the water, and the world slipping by, and though she’s tentative, the two do become a little closer. Until they pick up a young sailor in the middle of a storm, Matt. (Charles Bickford). He is immediately attracted to Anna, and despite her reservations begins to fall for him. This is the part that kind of puzzled me, as he’s more than a bit of a braggart, obnoxious, domineering and loud-mouthed. I thought he was a bit of a tool actually. Apparently, Chris does too, as he doesn’t approve of the idea of a relationship between Anna and a sailor.

Despite that, the two develop a nice rapport together, and upon arriving back in New York, spend a fairly fun day at Coney Island together. It’s here that Chris reveals he wants to marry Anna, and Marthy resurfaces to cause a bit of a problems, and lead to the revelation about who Anna really is. When she confronts both men with her past, the viewer is left to wonder if paternal and romantic love will win the day and will they be able to see the woman beyond the social stigmata she carries? And will Matt and Chris learn to tolerate one another?

I’m still on the fence when it comes to Garbo, I liked her far more in this than I did Anna Karenina, but she still hasn’t won me over. That being said, this one, for its time, was probably considered a bit risqué, considering its implied subject matter.

An interesting film, and a strong performance from Garbo as the movie comments on lies, secrets, and social perceptions. Did you see this one?