The third and final season of Airwolf gets underway with this pair of episodes. (To clarify, no one counts the abominable spinoff fourth season). Up first is Horn of Plenty written by Sutton Roley and airing on 28 September, 1985.

An elaborate plan is concocted to kidnap Stringfellow Hawke (Jan-Michael Vincent) with the plant to hypnotize/brainwash him and turn him and Airwolf into a weapon for use by the monstrous John Bradford Horn (Richard Lynch).

Hawke picks up an easy assignment that sees him flying the disguised Horn, and being wined and dined by the lovely Anjelica (Catherine Hickland). It’s all a ruse and String is subjected to brutal brainwashing techniques that makes him believe he owes his life to Horn, and will do anything for him. Horn is a vicious businessman and strategist, and an enemy of his own country. He wants to use Hawke and Airwolf to seize a nearby Caribbean island so that he can set himself up and establish his own government and rule, with the supercopter at his side.

Archangel (Alex Cord) helps Dom (Ernest Borgnine) and Caitlin (Jean Bruce Scott) when they receive a hostage tape from String asking for the delivery of Airwolf in exchange for his life. He also gives Caitlin a needle to inject String with to help with clearing String’s mind (though how did he know the pilot had been brainwashed?!).

In a shocking sequence String shoots Dom (with a knockout pistol, something Hawke doesn’t even realize) and when he comes to himself, he’s a wreck believing he’s killed his friend. Caitlin helps Hawke escape, while Anjelica professes her love for him, but she and Horn, her father, mysteriously escape while Airwolf lays siege to Horn’s base.

I wonder if that means they’ll be back before the end of the series? 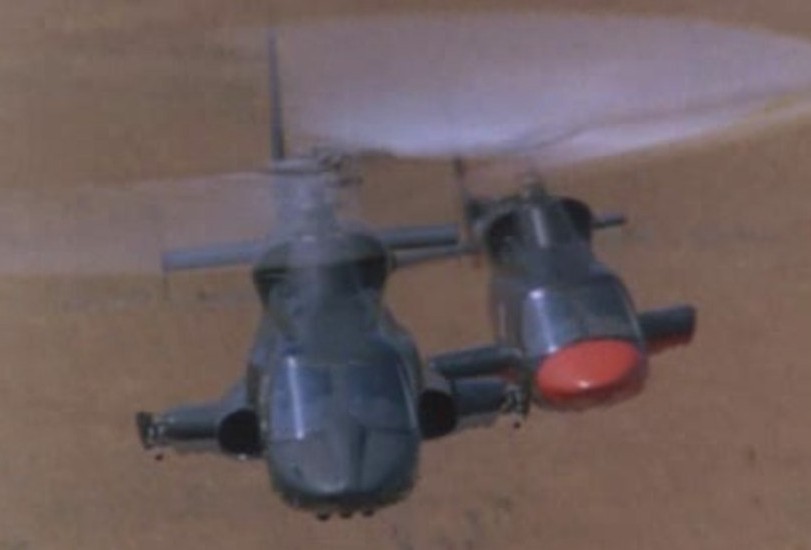 The next episode, Airwolf II aired October 5, 1985 and was written by Louie Elias and Al Martinez.

This action packed ep sees Wings Hauser guest starring as Harlan Jenkins, a protegé of the designer of Airwolf. Jenkins believes he has improved and perfected the supercopter; differentiated from the original by its red nose, underbelly and helmets, oh, and a laser! He’s also approached the Firm with it, while framing Hawke and his Airwolf team, including Archangel, with his services.

Archangel is dumped by the Firm for his support of Hawke and his keeping Airwolf a secret, and takes on the new chopper. Unfortunately, Jenkins has plans of his own, which involves stealing it, and selling it to the highest bidder. But first, he wants to have a showdown with Hawke, apparently they have a history together, having gone to flight school together, and Hawke beat out Jenkins for the position of Test Pilot.

So the two choppers square off against one another, and only one will fly away!!