I’m diving into a new book to partner with the Great Movies – 100 Years of Film one, I’m adding Sci-Fi Chronicles to the list, it covers books (including comics) as well film and television, the first subject is Mary Shelley’s Frankenstein.

I’ve previously reviewed the original film and its first sequel, Bride of, as well as one of the Hammer films, now we move on to Son of Frankenstein!!

Basil Rathbone, Boris Karloff and Bela Lugosi headline this third instalment in the film series, and with a cast like that, I knew I was in for a treat. The first thing I noticed though, was the stylized minimalist sets, and buildings, which put me in mind of the Cabinet of Doctor Caligari, I quite liked the design, of the world, though the little hamlet of Frankenstein seems like this odd combination of superstitious Europeans with a Western police force, but led by an inspector, Krogh (Lionel Atwill) who dresses like a French police officer, and lost an arm to the monster when he was a child.

Wolf Von Frankenstein arrives in his father’s hometown to take up residence in the family castle alongside his wife, Elsa (Josephine Hutchinson) and son, Peter (Donnie Dunagan). No one in the town wants him there and he is given a poor greeting but handed over the keys and papers of his father, which include all the information on the experiments that were conducted.

It’s soon discovered that Ygor (Lugosi) has been staying in the castle and lab, planning and hoping for revenge against members of the town, eight men who formed a jury to sentence him to hang, a punishment he barely survived, and not without scars. 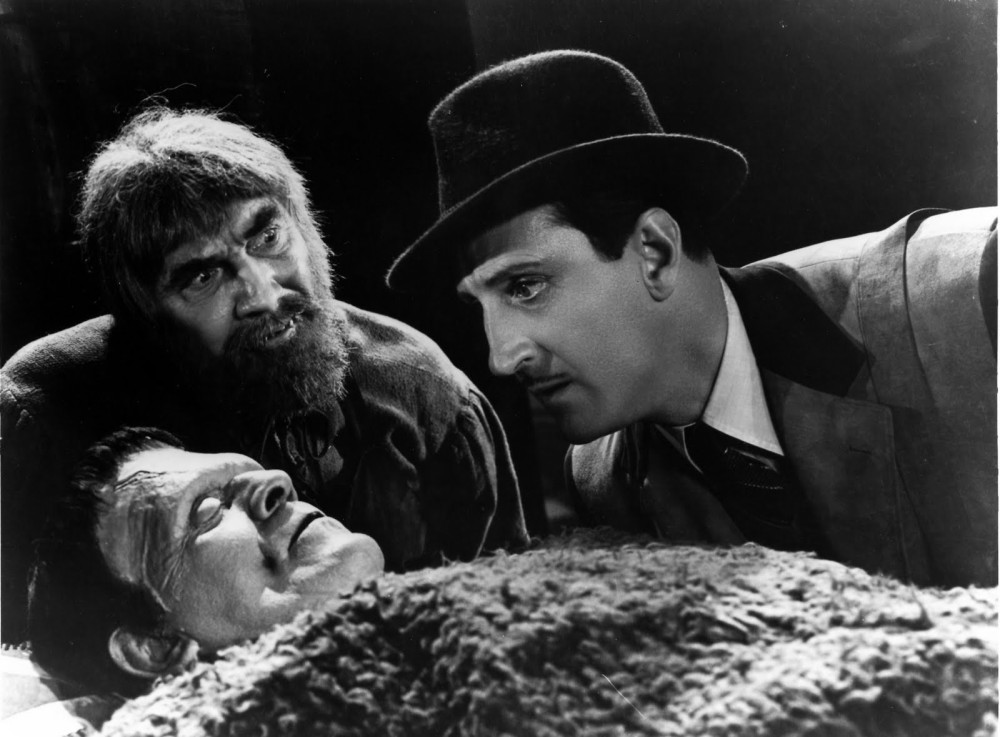 When Wolf encounters him, the villainous, and soon to be discovered, manipulative figure guides him down into the family catacombs where lays the monster, awaiting resurrection at Frankenstein’s hands. Ygor, himself, is unable to do it, but entranced with the thought of making a name for himself and carrying on his father’s work, Frankenstein revives the monster, but finds he’s not the one controlling it. It answers only to Ygor, who has plans of his own, and isn’t above eliminating anyone in his way, including Frankenstein and his family.

It has been awhile since I watched any of the older horror movies, but found myself falling right into this one, and rather enjoying it, right up to the last moments of the film, when everything is wrapped up in a nice little bow, and the Frankensteins leave the village, waving happily and joyously as if none of them had learned a thing by the tale’s end.

Karloff is great as the monster, not getting tons of moments to shine, but there’s a brilliant moment, when he grabs Peter, and for a moment, the creature is honestly thinking of killing him, but can still judge innocence, and can tell the difference between, right, wrong and revenge.

I think I’m going to enjoy working my way through this book, and I apparently have a number of Frankenstein films coming my way to start…

Do you have a favorite?