It’s December and Showcase has conspired to give Sue and I an early Christmas gift. We’ve been invited to the set of one of my favorite shows of the year, Defiance. We’ve been asked to come out, have a look around and chat with some of the cast.

(Sadly, we weren’t permitted to take pics of cast or sets, secrecy on season 2 is key! However there are some names and incidents that may be considered SPOILERS below, so if you don’t want to have anything spoiled for the premiere tonight, come back after the show…)

Once again, Toronto amazes us, as a quick GoTrain trip takes us not only to another place, but another time as well. We head east, not to St. Louis, but to Scarborough, where the small town of Defiance, a town established after the treaty of the Pale Wars, actually stands.

Defiance is a town of political intrigue and frontier justice, personified in the characters of Amanda Rosewater (Julie Benz) and Nolan (Grant Bowler).

I, personally, couldn’t wait to see what the day would reveal to us.

We gather in the production office and catch up with friends from Showcase. As we’re chatting in the preproduction room (plastered in concept art, character, weapon, and vehicle designs), Grant Bowler pops in to say hi, and momentarily chat with Sue and I. We’re delighted that he recalls us from our previous meeting.
Sue and I are momentarily left to our own devices in the room, and have a wander, taking in all the designs and looks for Season 2. From the small peek the art gives us, it looks like we can expect a lot from the season… there are hints of a kidnapping, a terrasphere, and a glimpse of other places we haven’t seen on-screen yet, like Los Angeles – there’s concept art featuring the Capitol Records building, a terraformed New York, an interesting new creature, spirit rider camps, a cosplay club, and a disturbing looking champagne room in the Need/Want.

A few other press/blog outlets join us, and we’re introduced to Steve Geaghan, the production designer for the series. Leaving the designs of the room behind, he leads us out to the sets kept on a massive stage.

He leads us to the interior set of the Need/Want, where Grant is settling in to do an interview. Even with having seen it on-screen, you’re not prepared for the true size of the space. It can easily accommodate up to 200 people, and took two months to construct. There is a lot of light, life and room for camera movement in this simply gorgeous set.

Steve tells us that they make the moldings bigger and the colors hotter to provide a hyper-realism to the sets, and by extension, the image we’ll view on-screen when viewers watch the show.

From there we wander over to the Tarr household, which is gorgeous, completely white, and as you can imagine, can get very dirty during filming. The intention of the set, when the flowing curtains are in place, to suggest the idea of living on a cloud. We stroll through the comparatively small space, one area is used to facilitate three different rooms – the dining room, an office, and of course the family sized tub/pool.

The bathtub scenes can take up to 4 hours to shoot, resetting, and keeping the water clean, and comfy for the performers…

We jump across town, only a couple of short steps actually, to the Mayor’s office.

This season, there’s a new mayor, an E-Rep, Niles Pottinger, played by Jim Murray. There’s a new feel to the office, consequently, and it has a bit of a European men’s club to it. There’s a chess set, period piece firearms, knives mounted on the walls which bracket military prints. His desk is covered in E-Rep file dockets (I had a glance through them, did you know Nolan’s dad worked for Monsanto?), some hand written reports from the McCawley mines are mixed in with other reports, there are Elvis Presley records on a side table, and it all feels very stiff and formal.

Things have sure changed in Defiance.

We learn a secret as well, so SPOILER, it seems the new mayor has a bit of a fixation on the town’s former mayor, Amanda. It’s not a good one either, let’s just say there’s a brandy/wine cabinet…

We slip out of the office and find ourselves inside the Arch, home of Defiance’s radio station, and there are a couple of posters for Hellbug Persuasion (‘Fresh outta Defiance!’) as well as other band posters. The albums across the desktop are all labeled in Castithan script, something most viewers may never see, and I find myself wondering if the letters actually spell anything, or if they are just a beautiful design. I’m honestly willing to bet on the former.

We’re made to feel a little more comfortable as we step through the doors of the McCawley household. This is a craftsman home, with mining pictures and photos of St. Louis on the walls. There is a nice sense of comfort here, and one is immediately at home in the study, living room, or kitchen. I’d move in to be sure!

In addition to these sets, there are extensive green screen sets for adding in extra elements, set extensions, and other fantastic elements.

Stepping through a door, we find ourselves amongst the exterior sets. 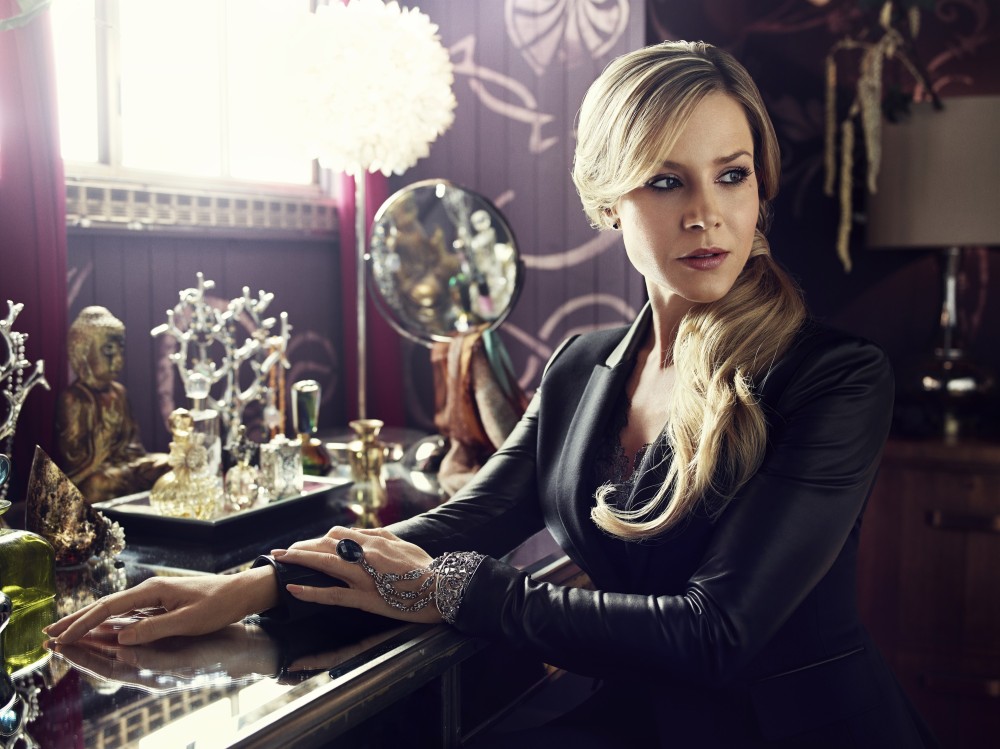 We are on the streets of Defiance. This is a seriously cool experience. From where we stand I can see the exteriors for the Need/Want, the lawkeepers’ station and Doc Yewll’s (Trenna Keating) offices.

There are cameras, and PAs moving about as a shot is set up outside the Need/Want, and between takes, we find ourselves wandering through E-Rep soldiers, Castithans and Irathients. It’s a bit of a buzz for a fan like me to be walking these streets, surrounded by the people who populate it.

There are flyers plastered everywhere about “Increased Surveillance, Increased Safety,” reporting damages to the E-Rep, most of them are even in multiple languages for the diverse citizenry of the town.

Before cameras start rolling again, we duck into Doc Yewll’s (Trenna Keating). The complete set is there, standing ready, waiting for Doc to make her appearance. There is plant life everywhere, and all of her bottles and canisters are marked in Indogene, a decidedly different looking script from Castithan.

We slip a couple of doors down between shots, and walk into the Lawkeepers’ offices. This was the first set designed for the series. There’s a survivalist, camping feeling to the entire place. The kitchen needs a good cleaning, there are sleeping bags, all manner of gear… It looks like Nolan and company are ready for the apocalypse.

The streets are angled so that the camera can be placed in any number of locations, the exteriors redressed slightly, and it will make it appear as if they are on a number of different alleys and roadways.

There’s Tommy’s (Dewshane Williams) apartment, which looks a little sparse at the moment as the season is wrapping up.

We see a couple of E-Rep posters for the encroaching railway, and there’s even a sign for something called Casti-Clean.

In a remote corner, there’s the exterior of the Tarr residence, the doorway leading only to their foyer.

We stand for a few more moments, eyes taking in the multiple levels, the walkways, the containers, the Hollows. I stand there with a huge smile on my face. This is unbelievably cool!

We wander back inside, and settle ourselves into the Mayor’s office. This will be our site for the rest of the day, as they’re available, some of the cast will be brought to us for a bit of a round table discussion.

First up, Grant joins us. (We weren’t allowed to shoot video, as he was made up for the season finale, and didn’t want any of those spoilers getting out). This is the second time we’ve chatted with Grant in a round table discussion. Something tells me, he’d be awesome to have in the studio, so if you’re reading this Grant, when you’re back in TO, get in touch with us!

He’s friendly, engaging, and he shares lots of stories and even shares some minor spoilers for Season 2.

He leaves us all happy and laughing and is quickly replaced in the hot seat, by Jesse Rath…

When that finishes up I slip out of the offices to hit the loo, and a craft services table. On my way back, I bump into a friend. Trenna is finishing up her make-up for Doc, and she chats with Sue and I for a couple of minutes before she’s called to set. She’s bril!

Finally, Julie Benz joins us for the last interview of the day, a nice way to wrap it up.

When it’s all done, and we’re all just chinwagging for a minute, I finally ask about Defiance product, and how oh how can I get my hands on a Lawkeeper badge… I was stunned to learn (and they need to remedy this, and market them already)… there are only 2(!) Lawkeeper badges. They haven’t made anymore!

Like that, our day comes to an end, and Sue and I, along with the other media, head back towards the front of the studio, and the real world begins to intrude on us again, and I swear I started walking slower, because I didn’t want to leave.

But, we stepped out, leaving the future to itself for the moment, and found ourselves back in Scarborough. Agreeing that we just had an amazing day, we climbed back onto the GoTrain and headed for home.
And now…

Now the wait is finally over. It’s been six months since our visit to set, and now I finally get some new episodes TONIGHT!

Make sure you tune in tonight on Showcase!!!