Thanks to the amazing work at Touchwood PR (you know who you are!), Sue and I were invited to cover the Canadian Screen Awards this week. The week is filled with lots of things for the Canadian broadcast, film and television industry, all of it culminating in the broadcast Sunday evening, hosted by Martin Short, that recognizes the best works this year.

Sue Maynard and I were pretty much wowed from the off as we stepped inside the gorgeously appointed Sheraton Hotel in the heart of Toronto, and were immediately surrounded by men in smart evening clothes and women in gowns and dresses. The industry was out in high form for the first of two big gala dinners to distribute thee plethora of awards and recognize outstanding work in the industry.

We wandered downstairs, preparing to check in, finding ourselves on the red carpet, one end of which was set up for photogs to do their thing, and didn’t lead anywhere. The other end of course went into the main hall being used for the awards.

We gathered up our press passes, and were directed to two rooms, the main press room, where the winners would appear after leaving the stage to have brief interviews with the press, and a second room where we could watch the streaming of the awards, and enjoy a bite to eat and something cold to drink.

We claimed a table, and decided to be the bold pair of the room, which was still slowly filling up. There were others present, but they were quietly conferring with one another, and generally, keeping to themselves. Sue and I knew we were going to have fun with the night, and tweet and make notes and just embrace the evening with the sheer joy that we bring to our show…

So, we dished some food onto our plates…

We were greeted by vegetable lasagna, salad, sliced fruit, cookies and pudding, and were happy to take part of almost all that was offered (I’m not a big salad guy). Wine (both red & white) and beer, (thank you Steam Whistle) started flowing freely, as soon as I started the line on both (I think everyone else was waiting for someone to make the first move) and smiles started appearing around the room (there’s probably a correlation there…).

The room was seen over by a very nice attendant, George, who bussed plates, took glasses and made sure everyone was content. A very fine gentleman.

Each door you would pass through had big, BIG, security guys, so happily none of us would have to worry about our dishonorable mayor showing up. I think most of the industry was a little put out by him claiming his trip to LA was to promote filmmaking and ‘Hollywood North’ since none of that happened, and no one in the industry was even consulted.

The press, scattered about their tables, started digging into their meals, while they made notes for their articles, blogs and broadcasts, and I noticed pretty early on, that Sue and I were the only ones laughing and truly enjoying ourselves, before the show even began. Now, don’t get me wrong, I KNOW that most of them were there to work, and file reports, but I’ve always believed you can at least have some fun doing it.

We started tweeting #CDNScreen14 and sent a selfie #CdnScreenSelfie, and threw in #pressroom as well, to see if we could keep the ball rolling. (I think we were the only ones in the room actually doing that, I could be wrong).

Apparently we were doing something right though, because the CBC started following and tweeting at us.

After a couple of announcements, spaced about 12 minutes apart asking people to please sit down so they could get under away. The evening started with a fantastic montage of TV and film that Canadians have created this year. Orphan Black, Seed, things we love… Sue yelled at the screen when Bomb Girls appeared, proclaiming “I MISS YOU!!!” I rapped my knuckles against the table in applause, and marveled at all the amazing work the industry had accomplished this year.

As it wrapped up, I leaned over to Sue and commented that it’s amazing how many of the shows and images we both recognized, ten years ago, we may not have been able to do that, Canadian Film and Television is entering a golden age, and we’re happy to be involved with it, even peripherally.

The evening’s host Steve Patterson seemed to have to work hard for his jokes last night, but he definitely kept his energy up, and opened the night with the seemingly requisite barrage of shots against the goof in office, and then current events.

He realizes though the show has to be quick and move, because there were a stunning 52 awards to give out!! So, he and the band sing a cover of Lourde’s Team, which showcases the fact that we have a sense of humour about ourselves, and can relax, laugh, and enjoy who we are.

The first trio of awards were the ones I was most interested in for the night because they were Best Cross Platform Projects and that seems to me the way a lot entertainment is going, making sure that the program is enhanced by surplus material available across a variety of medias. The brilliant sci-fi show, Continuum (with Rachel Nichols and Victor Webster) won for their interactive app, The Amazing Race won for theirs and The Next Step took one as well, for Fiction, Non-Fiction and Children’s & Youth respectively. They were all put together by the same company, Secret Location, and the same group seems to come up every time, much to the delight of the press room, scoring a hat trick right out of the gate. By the third award, we’re joking that this company has ‘got this’ and now will go on to conquer the rest of the world. Nice work!!

Defector: Escape from North Korea won a Diversity Award for director producer Ann Shin, a fantastic film that you need to see if you get the opportunity. 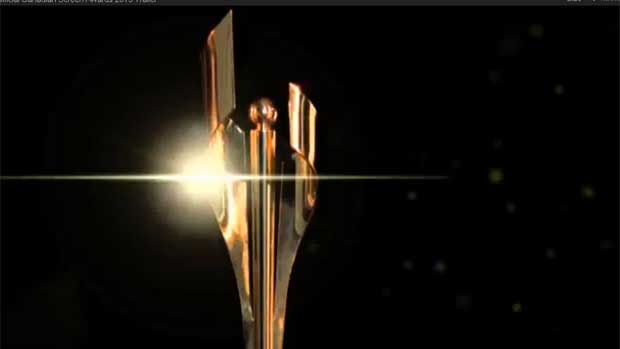 There weren’t many surprises for me in the sports and news categories, I did love that Peter Keleghan took home Best Host/Interviewer in a News Information Program/Series for The War of 1812: Been There, Won That.

Amazing Race: Canada got recognized, as well as some brilliant docs like We Were Children, and I Am Not A Rock Star.

The work that was recognized this evening were all worthy and the cream of the crop, which is not to speak ill of those that didn’t win, the competition was insanely fierce because the quality of work in this industry continues to rise, and we saw and heard how everyone works together, no matter who they work for to put the best images on our screens.

It’s stunning, and the evening left me pleasantly agog and overwhelmed by the amazing things that are happening in Canadian film and television.

And that was just the first night!

Tonight is the industry evening, where some of the stars will be out and shining, gearing up for the final award show Sunday night, and we’ll be there covering it.

I will openly admit that we didn’t make it to the end of the show last night, I saw that the twitter feed was still going strong at 10:30, and some of us had to be up to go to work in the morning! Still, we were happy to be afforded this behind the scenes glimpse of the industry that both Sue and I love so much.