Sometimes you just want to watch something fun… Well that feeling hit me recently, so I decided it was time to revisit this John Carpenter classic.

Though the more I watched it, the more I realized it actually has more resonance with society now than it did when it first came out. Wishing that this was the reason things are as bad as they are right now is wishful thinking though. Still, it would be nice if this was the solution to our problems…

Roddy Piper is Nada, a drifter who finds himself in Los Angeles, as part of the slowly being eliminated middle class, and the growing poor (sounds familiar right?!). forced to live in modern-day Hoover Villes, they work to get by, watch television, and feel that there is nothing that can be done to change their situation.

But some people are trying to fight back. There are interruptions in broadcasts, urging people to fight back, to wake up from the sleep that the wealthy and well-off have lulled us into…

Nada discovers how bad things really are when he slips on a pair of sunglasses and discovers that not only is there subliminal controls and advertising EVERYWHERE, a large portion of the wealthy elite are actually aliens or in league with them in an attempt to gain power and prestige over everyone else.

He pulls his ‘friend,’ Frank (Keith David) into it, literally, via a 5 minute long fist fight in an alley. But once the sunglasses are in place, they both realize things are in a bad way. But there must be some way to stop these aliens who are slowly converting the planet over to their own needs and using our resources, all while we fight over pieces of paper and fame that we worship as gods.

Along the way he meets up with Holly Thompson (Meg Foster), who works at the local Cable 54, and is now privy to what is really go on.

This film is still so much fun to watch, and yes, you get past the goofiness of some of it, and there really is a pertinent theme there that as mentioned relates more to today’s society than it even did when the film was made. 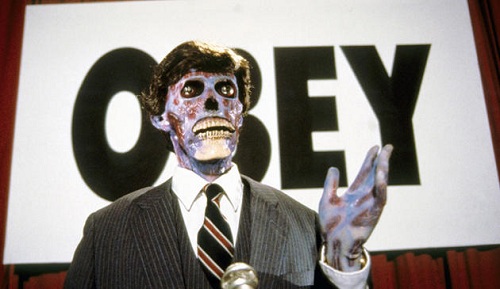 The aliens look great, the subliminal messages that are everywhere are cool, and not so unbelievable, and like most Carpenter films it has a a wicked sounding score composed by Carpenter himself alongside Alan Howarth.

If they were to remake any of Carpenter’s films, or if he were to revisit any of his prior excursions, I would love to see an updated take on this film, because you know it would work so well in today’s environ.

John Carpenter has always been uber-cool in my books, making films that always just seem a little off from the mainstream, and I love when I have an opportunity to rewatch some fof them.