Cary Grant and Katharine Hepburn pair up in this hilarious comedy, the next title featured in Great Movies – 100 Years of Film. Filled with Howard Hawk’s signature rapid-fire, overlapping dialogue, there are witty remarks, cross-dressing, a goofy love story, a leopard names Baby, and a missing Brontosaurus bone.

Grant is one of my favorite old school Hollywood actors, and so I settled in expecting to be greatly entertained, and I was! Grant plays David Huxley, a paleontologist, mistaken for a zoologist by Susan (Katharine Hepburn). David is about to be married, to his assistant Alice (Virginia Walker), who is more interested in furthering his career than in him specifically, and the two are worried about securing a grant from a widow, Elizabeth (May Robson) through her lawyer Alexander Peabody (George Irving).

David however constantly makes a bad impression on both of them, getting drawn away by mishaps with Susan any time he is meant to talk with Peabody, including a hilarious sequence that sees both David and Susan have to leave a restaurant because of ruined clothes, and Elizabeth thinking he’s a little odd, when they first meet, and he is dressed in a lady’s bathrobe. 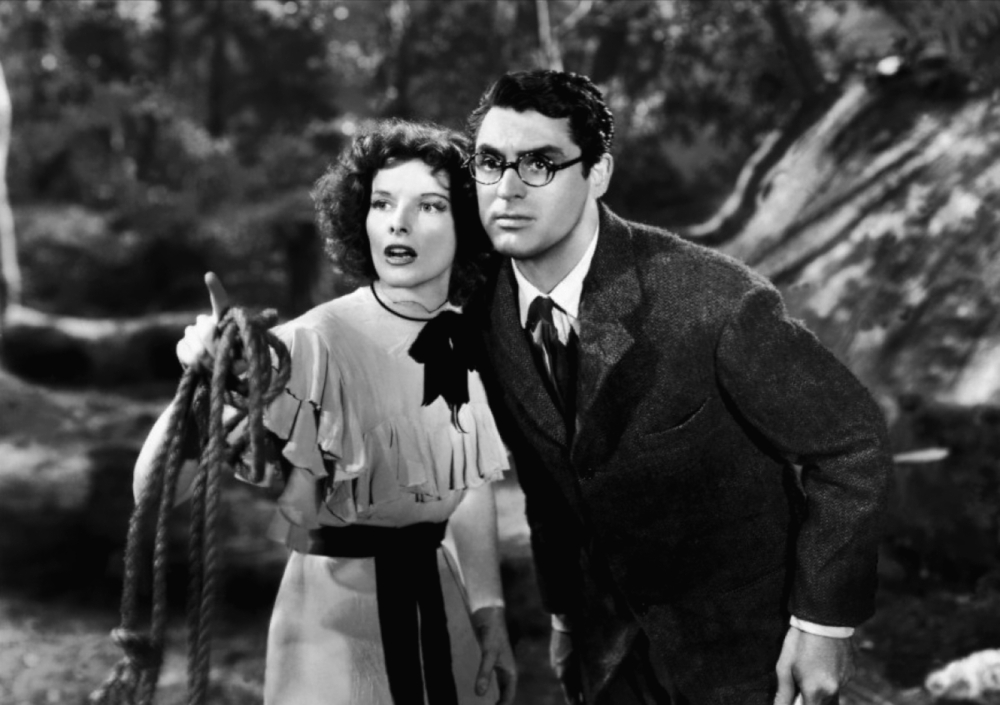 Susan is seeking a little help with her leopard, Baby, sent to her by her brother in Brazil, and decides the best place for her is the Aunt Elizabeth’s home in Connecticut. So David is dragged along on the trip, which sees a ruined chicken truck, a stolen car, and a witty exchange with the local constabulary.

The leopard is easily assuaged by anyone singing I Can Give You Anything But Love, so that shows up a lot, in hilarious bits.

Then throw in the family dog, George, who steals a long-awaited Brontosaurus bone from David, and promptly buries it somewhere on the family’s property.

This is a screwball comedy at its best, with some of the best dialogue I’ve heard in a long time, it simple crackles, and watching Grant and Hepburn deliver it is priceless. Grant is of course the master of the double take, and his performance, apparently inspired by Harold Lloyd is brilliant.

The film, driven by the quickly delivered dialogue is frantically paced, and just goes, goes, goes.

It’s very funny watching the absurd trouble David and Susan find themselves in, as Baby escapes, David attempts to secure the grant, as well as get back for his impending marriage, and chase George down so that he can dig up the buried bone. It’s no surprise that both Susan and David end up in jail before the film’s finish, and even there, the dialogue continues to snap, as Susan talks circles around the police.

Hawks handles the comedy brilliantly, and gets wonderful performances from his two leads, true, I wouldn’t want someone like Susan in my life, but it seems that she and David are made for each other, even if trouble seems to trail after the pair of them and cause them as much angst as their shared company provides them with joy.

This one may end up being one of my favorite comedic Grant roles, though there’s always a place for Arsenic and Old Lace.

What is your favorite screwball comedy?

And wait til I start the five recommendations that accompany this one!!!