Tonight on Space, Kelley Armstrong’s books come to live with Daegan Fryklind’s adaptation of The Women of the Otherworld series title Bitten.

Filmed here in the Toronto area, the series itself is set in Toronto and upstate New York, specifically Bear Valley and the Danvers home, Stone Haven. It follows the story of Elena Micheals (Laura Vandervoort), a woman who has moved to TO to get away from her past with the Danvers, and her own dark history… She’s the only female werewolf.

Eager to forget all that has gone before, not just the horror of getting extremely hairy on occasion, but of growing up a foster child, Elena is settling into life away from the Pack (based in Stone Haven, and led by Jeremy Danvers (Greg Bryk)) and enjoying the love life she has with Phillip (Paul Greene), a succesful ad executive. 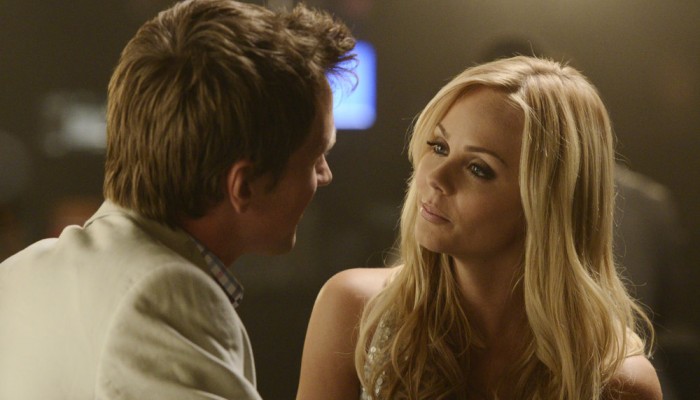 When a rogue werewolf, or ‘mutt’ as they are refered to, kills a human near Stone Haven, Jeremy fears the act may be deliberate to draw them out, as well as a defiant act against the pack. He decides to call the family back, all of the family, to hunt down the mutt and stop him.

Elena initially refuses, instead turning to Logan (Michael Xavier), a fellow member of the pack who is also in Toronto, for advice.

Elena tries to balance the duties of her new family, with the obligations of the past, including a shadowy past (unless you know the books or have read any of the character descriptions) with Clayton Danvers (Greyston Holt).

The first episode, unlike a lot of new series pilots, takes its time, and not a lot really happens, we are being introduced to the characters and Elena’s world as a werewolf. The transformations look a little painful, as they probably should be, I mean your whole body is changing into something else… that HAS to hurt!

The transformations happen on-screen, and do look really good. You can tell that the wolves are CG, there’s something about the way they move, but not enough so to distract you from what is happening, they look pretty damned cool, they also have the eyes of their human counterparts, which is a really nice touch.

We also get to meet other members of the pack, like Nick (Steve Lund), who seems to be a bit of a charmer and our introduction to him is a really fun scene…

The series looks like it’s going to be sexy, scary, and a lot of fun, filled with a ridiculously good-looking cast, with a story we’re just slowly being introduced to as we move deeper into the world. I think this one has a lot of potential, as long as story and character balance, there can be some interesting things done with this series.

Are you planning on watching it this evening? Have you read the books? If so, what are you most looking forward to seeing?

Bitten airs Saturday nights on Space! What are you watching?