Their heyday has passed but due to the show’s popularity they still frequent cons, and store openings, and it is this con where we join them, and they are in turn joined by Guy Fleegman (Sam Rockwell) who played a no-name character who got killed off in an episode before the first commercial, your generic red shirt. Despite the fact that most of his fellow castmates don’t like him (for stealing the best lines, cutting them out of episodes), they all admit he knows the show backwards and forwards, and always takes time with his fans.

That is until an odd group of silver suited folks show up, led by Malthesar (Enrico Colantoni – who created the brilliant and unusual way that he speaks), Teb (Jed Rees) Quellek (Patrick Breen) and Laliari (Missi Pyle) show up. Nesmith mistakenly assumes they are a group of fans that he’s supposed to meet and do a private function with, but that is actually super-fan Brandon (Justin Long).

It seems these folks are actual aliens, who believe the television show is an actual recorded event, and have come to Earth to seek the help of this most famous crew to save their race from the evil Sarris (Robin Sachs), who was designed by the late and sorely missed Stan Winston and his studios.

What follows, as each of the cast members learn what is really going on, is a hilarious take on fandom, science fiction television shows and the good and bad featured in them.

They board the actual Protector, and have to learn to work together more so than they ever did for the show, and the stakes are so much higher than ratings. In the end, it’s the fans who help save the day due to their knowledge and love of the original series, and that speaks to the heart of fandom – the love and knowledge of a television show. It’s brilliant when Nesmith reveals to Brandon that it’s all real, his reaction is something I always wished I could so with Star Trek or Star Wars.

There are injokes a plenty, sly little nods to archetypes, clichés, and well-known films and shows. It pokes fun, but pays homage to the fans who love these shows, and is also full of heart.

I saw this movie in the theater, loved it, and was delighted to learn that upon its initial release to DVD there was an alternate audio track, completely in the original Thermian – I’d be damned if I could understand it, but it was AWESOME!!

But that’s the point of the movie, it’s awesome, it’s funny, the gags are brilliant (miner vs minor), and it always reminds us to…

“Never give up… Never Surrender!”

Fellow Questarians, what is your favorite moment in the film? 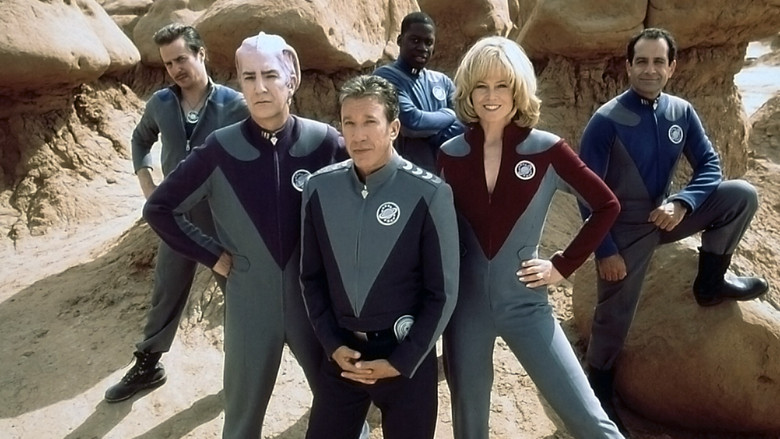