And just like that Season 2 comes to a close. Sigh.

Clocking in with 9 episodes this season, the season finale of Aaron Sorkin’s fantastic show, comes to a close by really telling relationship stories this time around as the jobs of everyone at News Night hangs in the balance.

As November 8, 2012 leads to Obama’s second term as president, Will (Jeff Daniels) and his team prepare for the repercussions of the Genoa debacle to kick them out of a job. Charlie (Sam Waterston) continues to pester Leona (Jane Fonda) about accepting their resignations only to learn that she has left the decision with her son Reese (Chris Messina).

Meanwhile, Jim (John Gallagher Jr) tries to get Maggie (Alison Pill) to accept that she didn’t do anything wrong in her disastrous trip to Uganda, and also to finally reconnect and share what happened with Lisa (Kelen Coleman – a face who was sorely missed this season until this episode). 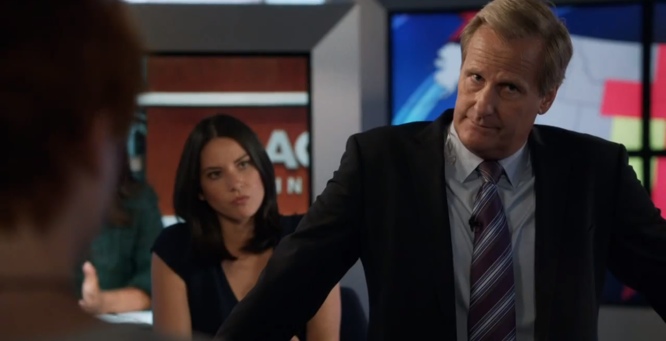 Relationships are key this episode, as Sloan (Olivia Munn) finally learns who bought the signed copy of her book, Jim learns that Lisa didn’t think she was smart enough for him, and he wants to make sure he doesn’t screw up with Hallie (Grace Gummer), and then there’s the best one.

As Will and Mac (Emily Mortimer) prepare to step down from their positions, making way for Sloan (who can’t seem to get a word in edge-wise during the broadcast), Don (Thomas Sadoski) and Elliot (David Harbour), they have a discussion in the hair/make-up room that sees them being brutally honest with one another, laying their cards on the table, and leading to a rather joyous ending.

Will also, thanks to Taylor (Constance Zimmer), gets to discuss why he still considers himself a republican, but hates what it means that he has to be – homophobic, a fact denier, and counting how many times someone goes to church, are but a few of things he point out as having corrupted the party. He also argues that the two-party system should be smart and honorable, both working to the betterment of the country, and it shouldn’t require one party literally hating another. 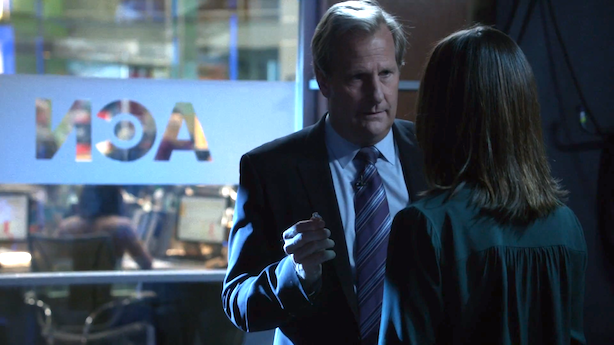 They decide to sit on the Petraeus story, as they don’t see how it would affect or better inform voters that night, sticking to their beliefs that they should make sure that the public has the best possible information to inform their decisions, in this case, a national election.

It was a very good season, that saw our team get knocked down both personally and professionally, but they still struggle forward to make their reporting the best it can be.

The show continues to portray journalism, both the old and new media as an optimistic and idealistic tool. That instead of being pandered to by corporations and dumbed down reporting, that they can treat viewers intelligently,

This show continues to foster my blooming interests in news stories, and international politics, but now, there’s too long of a wait until the next season rolls around…

Still, I have a couple more seasons of the West Wing to get through while I impatiently wait.

The Newsroom will return to HBO in 2014!