TORONTO, May 27, 2013 – Waging war not with bullets and bombs but with carefully chosen words and gifts from the heart, fans of TV’s Bomb Girls continue to fight to get their show back on the air.
Almost a month after Bomb Girls was cancelled by Global TV, a shipment of 1,000 blue bandanas stamped with “Keep Calm and Save Bomb Girls” was sent to the Global TV offices in downtown Toronto, Canada, on Friday. This shipment of ‘Victory Bandanas’ was funded entirely by donations from Bomb Girls fans, who raised more than $5,500 in three weeks.
These head scarves are meant to resemble those worn by the Victory Munitions factory workers on the show, while carrying the fans’ potent message. Individuals who donated more than $25 received a printed bandana of their very own, and photos of Victory Bandanas on display have already started pouring in. The hope is that such a significant show of support, passion and love will send the message to Global TV that fans want their show back on the air and will do nearly anything to get it there.
The fundraiser is still ongoing, having already collected enough proceeds to dedicate well over $1,000 to charity. Save Bomb Girls is proud to be supporting the Ajax Bomb Girls Legacy Campaign, a community project to build a monument to the real Bomb Girls of World War II, as well as all other women war workers. Save Bomb Girls started out with an original goal for the Victory Bandanas fundraiser of $1,000; by raising more than five times that amount, Bomb Girls fans have shown their mettle and their determination. They want a third season, and they aren’t afraid to fight for it. Carry on, Bomb Girls.
### For additional information, please visit: http://www.savebombgirls.com For any inquiries please contact us at press@savebombgirls.com
Also available in DOC/PDF format: http://www.savebombgirls.com/resource/SaveBombGirls_PressRelease_v3.doc http://www.savebombgirls.com/resource/SaveBombGirls_PressRelease_v3.pdf For graphics, please use: http://www.savebombgirls.com/graphics/Press_VictoryBandanas.jpg SOCIAL MEDIA LINKS: Twitter – http://twitter.com/savebombgirls Facebook – http://www.facebook.com/bombgirlsneedsyou Tumblr – http://savebombgirls.tumblr.com 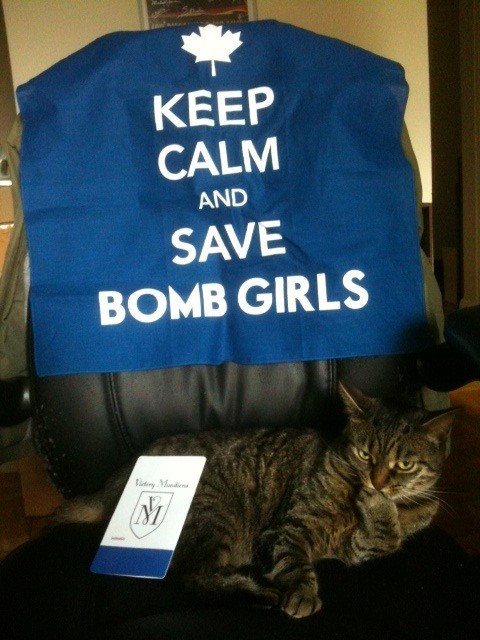