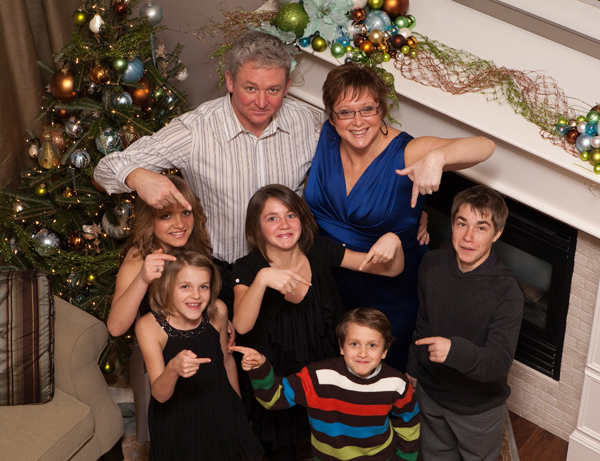 When Cathy and Martin Ward, a suburban Canadian couple living in Surrey, BC, decide to adopt a child from an orphanage in the Ukraine, they have their sights and hearts set on a single infant or toddler.  While waiting for the child they want, however, they agree to host a 4-year-old girl, Alyona, for the summer.  Falling in love with the sweet youngster, the Wards soon find out that Alyona has 4 more siblings, all living in the orphanage, as well as a baby sister, Tanya, who had already been adopted by a Ukranian family.  Cathy and Martin decide to play host to Alyona again the following summer, but also decide to include her slightly older sister, Snezana, this time around.

The experiment goes very well for all involved, and the Wards turn their thoughts toward adopting both girls, and express their desire to meet their remaining 3 siblings, as well.  Before long, precocious younger brother Sascha, and teenaged Yulia and Sergey, have joined them all for a vacation, and seeing the five children together settles it for Cathy and Martin both.  They decide to try adopting all five siblings at once, and make a go of becoming a family together.

Nothing, of course, goes as smoothly as anyone hopes.  The Wards are permitted to adopt only Alyona and Snezana in the beginning, while the other three children must return to the orphanage for a least another year.  Watching them all say goodbye at the airport and then again at the orphanage is heart-breaking, and that is really only the beginning of their adventures.  Yulia, as the oldest sister, is used to taking on the maternal role while in the orphanage, but once she has two loving parents to contend with, her sense of self is challenged as she struggles to find her own place and role within her new family. There is a lot of conflict between Yulia and Cathy in particular, as neither quite knows how to deal with the other, and that causes additional strife between Yulia and the other children.

In addition, Martin and Cathy were not prepared as well financially and emotionally to adopt 5 children between ages 6-17, instead of the one infant they’d initially planned for.  Worries about providing for his new family causes Martin to accept a job position in the Arctic which causes him to be away for weeks at a time, and the language barrier between the adults and the children – particularly for the three who had a prolonged stay at the orphanage – makes effective communication difficult even at the best of times.

As the director, Julia Ivanova has an incredible knack for knowing when to hold the camera on her subject and the events unfolding in front of her, versus those times when she feels the need to break into the conversation and facilitate the disclosure of things that are apparent to her, but which aren’t being expressed very clearly for those involved.  Her perspective is intimate without feeling invasive.  The result is a wonderful portrait of a family like any other in so many ways, but unique in and of itself in so many others.  There is definitely love – present and abundant – and even though there are struggles and problems, everyone seems to be at least somewhat determined to make it work.  As the oldest siblings, Sergey and Yulia carry their previous lives with them more than the other three, and even the way they deal with their new lives can be seen as near polar opposites from one another, yet in the end, there is still love.  Martin’s voice-over carries the viewer through the ebbs and flows of the story’s tide, and while the ending does seem almost rushed, it also feels more like just the end of a chapter.  For the Ward family, the story is still being written.  The adoption was only the beginning.

High Five: A Suburban Adoption Saga is screening at the Hot Docs Film Festival in Toronto: