I’m sorry to say it. After the goodwill last week’s episode built up, this one just kind of squandered it again. I just couldn’t get into this episode, I liked the glimpses we got of other rooms in the TARDIS, but over all, I just felt let down.

And I have to tell you… at this point, actually since my first introduction to the show, I’ve never really cared what The Doctor’s (Matt Smith) name is. I’m happy to accept it as a great unknown, and all this hoopla about finding out what it is, has not engaged me at all. I’m more interested in the mystery of Clara (Jenna-Louise Coleman) but I’m starting to worry that this mystery may fall short of expectations. 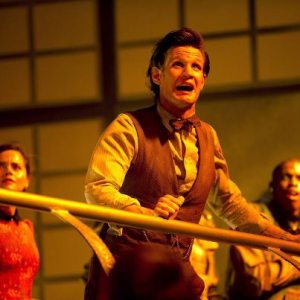 I love Doctor Who, but the second half of this series has been a little lackluster so far, and that hurts me to have to put that in writing. The moments I enjoy are overshadowed by those I don’t, and I so hope that this gets remedied soon, because I don’t want to leave the show, I want to have my sense of wonder, excitment and creepiness returned to me.

This week’s episode, penned by Steve Thompson, sees the TARDIS being picked up by a salvagers, who through their use of their magnetic tractor beam disable and damage the TARDIS. The Doctor somehow makes it out, but Clara is somewhere stuck inside.

In an enjoyable scene where the Doctor practically bullies and threatens the three brothers who form the salvage team, warning them about ever getting into a box with a madman, and what did you think was going to happen?!

But the rest of it seems rather slapdash and haphazard…

Clara running from someTHING that is chasing her, but upon reaching a giant library in the TARDIS, has long enough to leaf through a book entitled The History of The Time-War, and come across the Doctor’s name. Really? While something is hunting you down possibly to kill you? I know, let’s stop and read for a bit. Until the Thing ends up in the room with you because you were too busy reading instead of trying to find a way out.

Personally I thought Clara was smarter than that (no matter how adorable she looks in that little red dress and ankle boots).

And the brothers arcs were a little off as well, convincing one of them he’s an android really? And then of course with the episode’s ending being a great big reset button so the events never took place to have the one character then change without any instigating factors… No. Sorry boys, swing and a miss.

The Doctor sacrificing himself to get the message beacon through to an earlier point in the timeline could have been played much more dramatically, upping the stakes, but there was never any doubt that it wasn’t going to work, so there was no sense of jeopardy… Sigh.

I hate knocking episodes of The Doctor, but I know they are capable of better, we’ve all seen it.

Next week we see the return of a few familiar faces and the trailer looks decent as well, as The Doctor and Clara take on The Crimson Horror.