Ahh, now this is what I’m talking about for a race to the finish line!

Steve Cochrane pens this week’s penultimate episode of the season and it’s definitely getting ready to pull out all the stops for the finale next week (unfortunately I’ll be away and won’t be able to see it until I get back, oh well).

I realize that perhaps the show can’t be like this all the time, but this one was pretty much firing on nearly all cylinders!

It’s supposed to be Hale’s (K.C. Collins) inauguration as Ash, and we learn he’s been trying to broker a form of peace with the Morrigan (Emanuelle Vaugier), and has actually invited her to attend the event, a huge first.

There’s still some friction between Hale and Kenzi (Ksenia Solo) who still thinks he’s acting like a douche.

Lauren (Zoie Palmer) is off with Isaac (Shawn Doyle) working in a lab, and coming up with something that Isaac exploits, as a poison. We were right not to trust him because he’s apparently involved in hunting the Fae down, having them fight against one another, and studying them. The dead ones apparently end up in that mass grave Dyson (Kris Holden-Ried) and Tamsin (Rachel Skarsten) discovered in last week’s ep.

Tamsin is still a bit of a drunk this week, dealing with things she know she has to do, but I don’t think wants to do any longer, and ends up in the bath with Bo for a moment… I do like their chemistry together, it just feels, well… naughty in the sexiest way.

Later at the Dal as Bo and Dyson have a chat a very familiar looking human bartender Jerry (Seth Cooperman) as Trick (Rick Howland) had to get ready for the ceremony. It seems though Jerry has been put in place by Isaac, and poisons Dyson, a blatant attack by a human on a Fae.

Dyson wakes up and finds himself having to fight a cage match to the death while his captor watches from the  open rooftop of an observatory. Great location!

Bo learns that Tamsin is up to no good with the potion she’s been preparing, Lauren discovers that Isaac is more evil than he initially appears, and the Morrigan uses the attack on Dyson to hold a vote of no confidence for Hale, and then proclaims that all claimed humans by any Fae are now terrorists, they are to be seized and await the setting of a date for their execution. 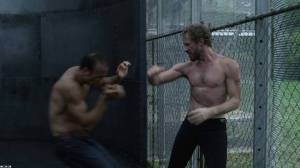 This rockets things along to Hale and Kenzi finally sharing a kiss, a long overdue one, while surreptitiously slipping the key for her handcuffs into her jacket pocket. There’s also a Fae wandering about, pestering Kenzi for the length of the episode about what if she were Fae, or had Fae powers… Kenzi thinks it’s a bit of a con, and I have to agree. I also hope that Kenzi doesn’t become Fae. It’s a more interesting dynamic having her as the outsider, but still family.

Everything happens fast and furious in this episode, it’s just one thing after another, ratcheting up the tension… 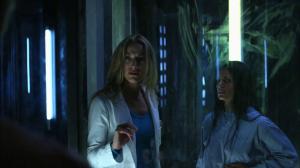 The Wanderer is neither heard or mentioned by name at least, in fact the song doesn’t make an appearance at all in this episode as far as I can tell, though there is a nice cover of The Minstrel Boy playing in the Dal.

One of the things that we’d been talking about all week was the fact that Lauren left her mobile on her counter top, which Bo addresses as soon as she comes in, though no one asks why she left it on… Was it just so that we could see that Bo was calling last week as she was leaving?

This was a great episode to lead us into the final adventure of the season… I’ll be interested to see how many story threads are tied off, and what’s left unresolved for next season… 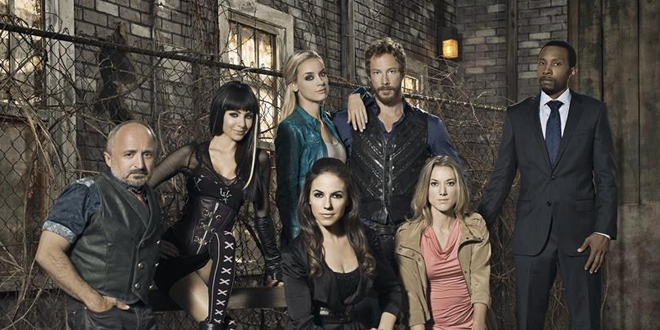