Sadly, Sue and I didn’t learn about this in time, and missed the media window, but I did get a look at the festival’s opening film, Sick, featuring the work of our studio guests, director Ryan M. Andrews, and actor Sandra DaCosta.

Sick is a character driven horror film, chronicling the lives of survivors after the zombie outbreak. There are tales of vultures, those who survive by any means necessary, even hinting at cannibalism, the survivalists, those that have banded together, working to survive against the seemingly ever increasing horde of undead, and there is the hidden government installations, a network across the continent working to find a cure, as they study and understand the zombies and the outbreak.

Sick is a low-budget, indie-horror, and it embraces it’s constraints, focussing on characters rather than scares, it seeks to let you experience what the world is now like for these groups of people, and what happens when they clash…

Scripted by Andrews and Chris Cull, the film follows Dr, Leigh Rozetta, ably played by Christina Anne Aceto, who draws your focus in every scene she is in. She is working on a cure in an underground military installation, though the troops seem less than tolerant of her and her companion, Claudia (Jennifer Polansky), a previous Vulture that Leigh has taken under her wing. The two review the data logs of another scientist, Dr. Fehmi (played by scream queen Debbie Rochon), who gives exposition, through scientific reports.

Leigh sets a final, dangerous plan into action as she organizes an expedition out into what she thinks is a safe zone…

Out there, in the wilds, a group of survivalists, including Seph (Richard Sutton), McKay (Robert Nolan, who is everywhere in this film festival!) and Betsy (Sandra DaCosta). On a supply gathering trip, the group falls afoul of a group of Vultures in an inspired bit of distracting deception. Before things can be resolved the Sick arrive and tear most of the group to shreds with only Seph and McKay escaping…

They stumble across Leigh in the woods, and though she advises against them joining her, they follow her to her household home, where as night falls, secrets are revealed, the dead stalk them, and tensions rise…

The three of them have some great moments together, especially once night falls.

To my mind, there was only a couple of drawbacks to the film, there is a decided lack of close-ups, and inserts, things that could have punched up the tension and emotion of a lot of scenes. Andrews’ camera never seems to move closer than a medium shot, preferring to keep a distance to show you everything that is going on, which ensures that every bit of the budget is on the screen, but does tend to keep one emotionally left out of the film.

That may not be a shortcoming of the filmmaker, but a result of the guerrila style in which the film was made, it was shot fast and comprehensively, and should Andrews ever be given a big budget, and the time to tell his stories, he will continue to be a force to be reckoned with. 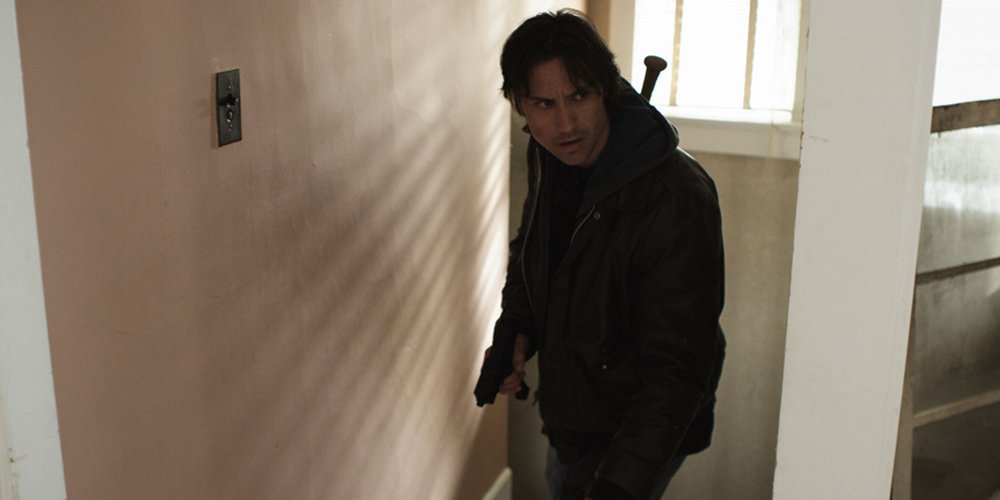 The other was the shift in Seph’s character, I don’t think it was established strongly enough that the group he lives with think he’s a bit of a psycho. I got the impression that they thought he was a bit of a douche, something he actually cured me of, when he and Leigh begin to develop their relationship. So when things happen in the last act of the film, I was a little puzzled, but went with it.

Overall it’s a great example of the work coming from the Canadian Indie Horror scene, and as I said, I can’t wait to see what Andrews does with a big budget, and is allowed to take his time and craft his film.

As a personal aside, knowing two of the cast, I have these things to say, Ms. DaCosta’s character met her demise far too quickly, and Mr. Nolan is a lot of fun to see on the big screen, he brings an edge of carefully controlled hysteria throughout the film, allowing it to explode in the final act as we race to the final frames of the film.

If Indie Horror is your thing, you need to keep an eye on Ryan M. Andrews, as well as his cast, as I believe he is one to watch…

Did you get to the Blood In The Snow film festival? (Which is an awesome name by the way – and needs shirts!) What did you see? What were your faves?