Playing to a sold-out theater last night at The Bloor Cinema, which seats 700 (!), Cockneys vs Zombies took the Toronto After Dark Film Festival by storm. This must have delighted the film’s director, Matthias Hoene, who was on hand for it, to no end.

Does the film add anything new to the zombie genre? No. 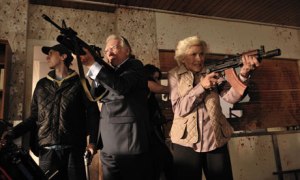 But that’s not its intention, it’s simply there to entertain, and it definitely does that. Everyone in the audience seemed to be absolutely delighted by the onslaught of the undead, and those fighting to survive it.

Picture Shaun of the Dead, crossed with Eastenders, crossed with Lock, Stock and Two Smoking Barrels and you know exactly what you’re getting from this bloody slice of UK horror-comedy.

Featuring an awesome cast including Honor Blackman (Goldfinger), Michelle Ryan (Doctor Who), Alan Ford (Snatch), Richard Briers (Much Ado About Nothing), Harry Treadaway and Rasmus Hardiker the story follows some Eastenders who are caught up in a robbery gone bad just as the zombie apocalypse breaks out.

The Macguire brothers (Treadaway and Hardiker) along with their cousin Katy (Ryan) are robbing a bank (which begins easier than planned) to get enough money so that they can save the old-folks home where their grandad and his friends live.

While trying to escape, the outbreak hits, and the group along with their hostages Emma (Georgia King) and Clive (Tony Gardner) are on the run not from the law, but from the hordes of the undead.

Determined to rescue their grandad, the Macguires take on all comers, and fight to not only escape, but saved their beloved East End.

This sets up some wonderful gags and kills, one of the most enjoyable being Richard Briers’ Hamish outrunning these slow-moving zombies with his walker!

Two truly priceless moments included one that is just so typically British… Football supporters, all decked out in their respective colours, clash on the street, even after they’re undead. And a brilliant, applause-winning moment, when a baby zombie gets drop-kicked – the crowd loved it!

As I stated the film doesn’t add anything new to the Zombie lexicon, but it sure is a fun ride (though I honestly believed that it could have been a little bloodier), though there are some pretty wicked moments, like a zombie getting its head blown off, but still having its jaws clamped on its victims arm.

The dialogue, the slang, the gunfire, the octogenarians, the zombies… all good fun and if you can’t have fun in a zombie film then what are you watching them for? 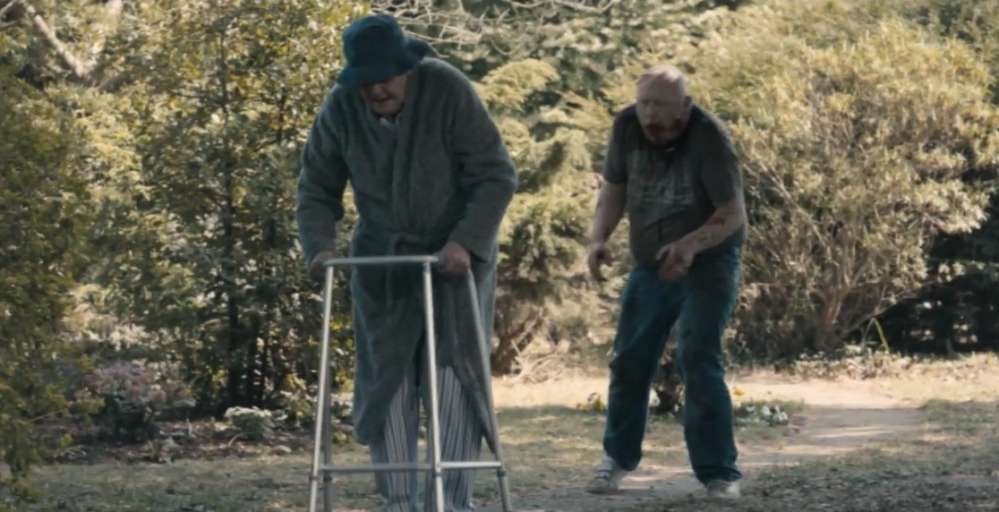 You can find more Cockneys vs Zombies here and on Facebook here!