Tony Scott, the brother of Ridley, makes the 101 Horror Movies list with his very first film, The Hunger.

This is a movie that is sexy and sensual, but also introduces the lonely, sympathetic version of the vampire to the big screen. I’m sure this creature had lurked around awhile before finding its way to the bright lights of Tinsel Town, but this is the first film I could recall that put a different spin on the vampire’s existence (though they never refer to themselves as such throughout the course of the film).

I remember seeing this film once, a long time ago, and not enjoying it because I was expecting more of typical vampire story. This time around, I really enjoyed it.

The film stars Catherine Deneuve, David Bowie, and Susan Sarandon (and a blink and you missed it appearance of a very young Willem Dafoe and John Pankow – which I thought was awesome considering they appeared together in To Live And Die In LA – and how awesome is THAT movie?!). 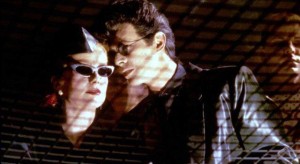 Catherine plays Miriam Blaylock and is centuries old. Her companion, Bowie’s John, is having a bit of a problem, despite the promise of eternal youth and beauty, he’s been unable to sleep, and has begun to irreversibly age.

This is something Miriam has gone through countless times before, as the number of caskets piled on the upper floors of her home seem to suggest.

Which tells us something about her character. She lies. She lies because she would rather damn these people to eternal life, even if they are laying decrepit and decaying in their coffins, still clinging to the thinnest scrap of life, tormented by unending darkness, unable to sleep, unable to feed, than be alone. 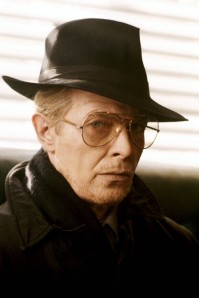 The two of them wander the cavernous rooms of their house, that is filled with relics and artifacts but also leave plenty of room for the memories they walk through. We see glimpses of the lives they’ve lead through the decades, and centuries, as they wander forlornly about their massive home.

John in an attempt to preserve his existence goes to see Doctor Sarah Roberts (Sarandon) who is working even now to discover the secrets of immortality, conducting case studies on animals, and searching for those elusive clues.

In a fantastic sequence, John literally ages in the doctor’s waiting room, having brushed him off as a kook. The make-up is spectacular.

John leaves only to continue aging, until Miriam has no choice but to box his decaying body up, still alive, inside one of the many coffins, and advises his neighbors to be kind to them, that she loves them all.

And Sarah comes calling, and it looks as if Miriam has found herself a new companion…

Tony Scott’s visual style is all here, even though its his first theatrical film, the saturated colours, the quick cuts that allow the interweaving of storylines in one scene, the almost glossy feel to everything.

I quite enjoyed the film this time out as I said, though I think I’ve had enough of the lonely, sympathetic vampire character at this time. I prefer the vicious ‘top-of-the-food-chain’ type, but Catherine Deneuve was able to distract me from that thought for awhile.

I do like a good vampire flick… how about you? What are some of your favorites? 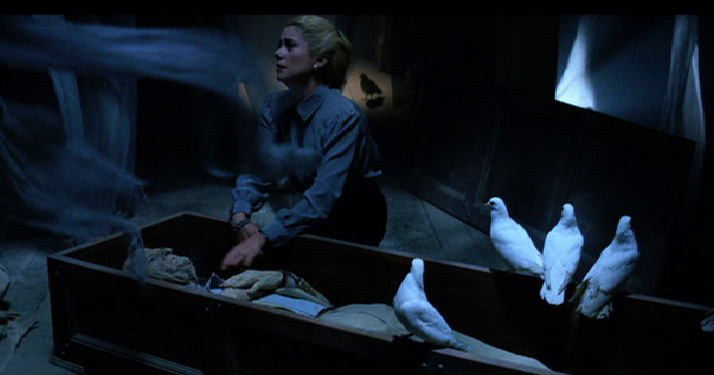