I was always anxious about watching this film, the John Carpenter remake is one of my favorite films, so I was worried what I would think of the original. I settled in to watch it, as it was next up on the 101 Sci-Fi Movies (as is the remake a ways down the line).

I was delighted and impressed.

But I should have known better, it is Howard Hawks after all. Much like the Poltergeist debate over whether Spielberg or Hooper directed it, the same thing has sprung up around The Thing From Another World, whether it was Howard Hawks or Christian Nyby. Either way, the film is brilliant.

Clocking in at just short of 90 minutes, the film still takes the time to set up its characters, and bring us that rapid-fire style of dialogue I si love about Hawks’ films, talking over one another, quick little witty lines, shared looks. All of these things help populate the film with characters, and some wonderful moments.

Captain Hendry (Kenneth Tobey) and his flight crew, including a newspaperman named Scott (Douglas Spencer) are summoned to the North Pole from Anchorage, Alaska, when a scientific outpost detects the impact of a large aircraft.

I already knew what they were going to find, but I was still eager and excited, already caught up on the film and the characters.

There, buried in the ice that was superheated by the crash and then refroze in the sub-arctic temperatures is an alien ship, a flying saucer! And frozen beside it, escaped, or thrown from the craft, is one of its occupants.

Lugging the alien in its block of ice back to the outpost, Hendry assigns a rotating watch over the disturbing figure. He still has time for a fun little romance with Nikki Nicholson (Margaret Sheridan), one of the outpost’s few female crew.

By mistake, the Thing (James Arness) is thawed from his ice, and escapes into the arctic night, though sticking close to the outpost, which we learn it considers a food source. The expedition’s lead scientist, Dr. Carrington (Robert Cornthwaite) after recovering a piece of the being after the sled dogs attack it (resulting in a terrible fate for them) learns that the being is an intelligent vegetable/plant, though it is mostly man-shaped.

Characters are divided, scientists versus military, as they try to control the flow of information and each other, not to mention surviving their ordeal.

Two of my favorite moments had one of the men, the one who saw the Thing escape it’s icey confinement runs into the mess calling for the Captain, still clutching his pistol, in fact aiming it at the Cap, not intentionally, just in the way he’s standing, and Hendry, mid-sentence, takes it from him and secures it. It’s just a nice little character moment. 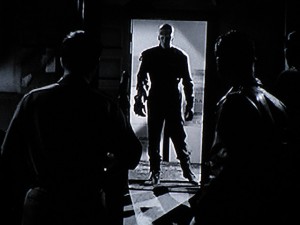 And then in a scene that made me break out in a huge grin, our heroes are moving slowly through the outpost, using a Geiger counter to pick up the Thing’s slight radioactive signature, and they’re using it just like the motion detectors are used in Alien and Aliens… Big Smile from me.

I also like the fact, that just like in the Alien film, which is still 28 years later on the list, our crew are getting orders not to destroy the alien, but to preserve it, we don’t hear anything about all other priorities being rescinded, but I don’t think this crew would listen to it. They are fighting for survival, using guns, flame, electricity…

And all of this is layered in the crisscrossing overlapping dialogue… I just love that! The by-play between the captain and his crew, and with Nikki, is just priceless, and so much fun.

And remember… To Watch The Skies!!!