Romero finds his way onto the 101 Horror Movies again with the follow-up to the classic Night of the Living Dead with Dawn of the Dead.

First off, let me get this out of the way. I liked it. I also like the remake. I did, however, find that the film itself, the 139 minute cut, seemed a little like the zombies themselves, a little slow and ponderous. For me the pacing just seemed a little off, and could have been tighter.

Despite that, the film is still brilliant. Telling the story of the zombie apocalypse from another bunch of characters instead of retelling the first movie was a great move.

The film opens in a tv studio, which is in the middle of a broadcast telling the viewers about the outbreak, what to do, and the like, which of course brings you right up to speed in case you didn’t see the first film, or had been living under a rock and didn’t know that zombies are bad.

Francine (Gayleen Ross) and Stephen (David Emge) work for the station, and decide they are running, stealing the news chopper, they flee, stopping to pick up two S.W.A.T. members Peter (Ken Foree) and Roger (Scott Reinniger) who are also running after a brutal encounter in an apartment building. 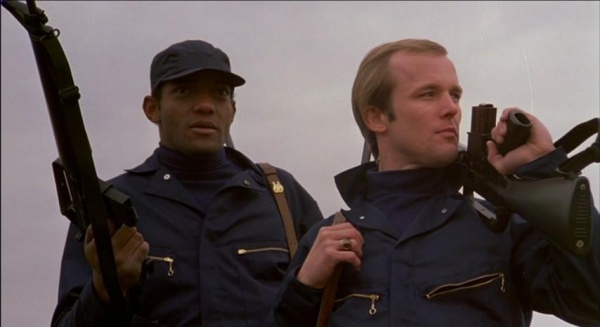 They head north, hopping from place to place to refuel, hoping to make it to Canada, watching the terror unfold beneath them, though like they say in the film, the rednecks seem to be enjoying themselves.

They finally set down atop a mall, which leads the film into a treatise on consumption and consumerism as both freedom and prison.

These ideas, especially in regards to themes in this film, have been discussed ad nauseum, and you really don’t need me to rehash them again.

They settle into the top of mall, in tucked away store rooms, and make sorties down to the mall proper to pilfer supplies, weaving and dodging the ambling undead, who have returned to the mall, an introduction of the concept that some of the undead have some memories, urges or behavior that they can recall.

The survivors build their own prison, securing the entrances and fortifying their position, all while living it up, with a seemingly endless supply of everything they need, including the occasional target practice.

Things, of course, are far from perfect, Francine realizes they are trapped there, and urges them to leave, and we learn she’s pregnant.

Roger, who seems to be a bit of a cowboy, ends up getting bitten, with a chunk of his leg and arm torn out in an attack. And you know that won’t end well.

And finally a marauding band of bikers arrive to upset the status quo to simply loot and kill, on the upside, the bikers do have awesome makeup wizard Tom Savini with them.

The themes in the film of consumerism and consumption are as important today, as they were in the 70s, and there are some great sequences, as well as some really well done effects and kills – the machete to the head is so awesome it made it onto some of the film’s theatrical posters!

While the makeup on some of the zombies doesn’t always seem to work, they are all washed out in a generic corpse grey, sometimes you can tell that it’s makeup packed on. This, of course, was less obvious in the first film as it was black and white, and if memory serves there’s a step-up in effects and make-up by the time the third film Day of the Dead rolls around, but I don’t think that one makes the list.

So in the end, yes I enjoyed it, I love the environment of setting the film in a mall, but I also felt it was overlong and a bit ponderous, and I hate saying that about a movie. I always want to get the most bang for my buck, and have no problem with long films, as long as they keep me engaged.

Still, we are on the cusp of the 80s now, and there are a lot of films I am looking forward to revisiting!!! Stay tuned!