Some films stand the tests of time, eternally appealing.

King Kong is one of those films.

This is yet another of the titles listed in 101 Horror Movies, but honestly, I was simply just looking for an excuse to pull it out of my collection and give it another watch.

While Peter Jackson remade it in 2005, his film, while beautiful to look at, felt too top-heavy in terms of running time, what worked for Lord Of The Rings, and hopefully The Hobbit, didn’t serve so well here.

There was also a remake in 1976, featuring The Dude, Jeff Bridges and Jessica Lange.

But there is nothing that will ever top the original. Yes, special effects may improve, as well as story-telling and characterizations, but nothing beats the sheer spectacle that was the original film.

The film follows filmmaker Carl Denham (Robert Armstrong) as he co-opts young actress Ann Darrow (Fay Wray) to star in his latest wilderness pic. Hiring a boat, Denham heads to a hidden island, where the locals, worship a giant ape, who is separated from the tiny village, by a wall built long ago.

When the locals see Ann, they organize a raiding party to strike in the middle of the night, kidnapping her, to sacrifice her to Kong.

The lovestruck John Driscoll (Bruce Cabot) leads the expedition to recover Ann in the world beyond the wall. What they find is a stop-motion, rear-projection lost world decades before Spielberg & Crichton brought dinosaurs back to life with Jurassic Park. 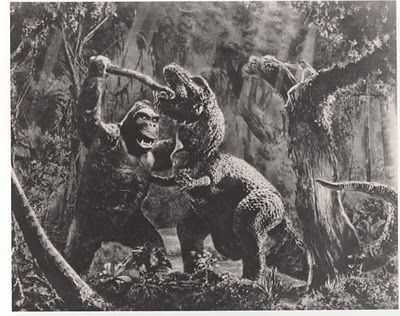 While the dinosaurs we see don’t all behave the way we know, or think we know, they did, the special effects are still outstanding. The spectacular work of Willis O’Brien and his effects team is still amazing.

The adventure is a lot of fun, though some of the dialogue doesn’t quite stand up today, some of it is actually cringe-worthy.

The final sequence, after Kong is brought back to New York in chains to be displayed before the world, is probably one of the most well known even for people who have never seen the film. The hand breaking through the apartment window to grab a screaming Fay Wray, the ascent of the Empire State Building, the battle with the planes, and then the long fall, and the line “It was beauty that killed the beast.”

Yes, the big lug changes sizes depending on the shot and location, but that doesn’t change the fact that the film is a lot of fun, and a classic from yesteryear that continues to entertain…

See KONG!! The Eight Wonder of the World!