What would you do to save the most important people in your life?

Would you commit suicide?

This one is a helluva romp!

The episode sees the return of Jim Moriarty, cunningly played by Andrew Scott, who in a sweeping move breaks into the Bank of England, one of the biggest prisons in Britain and the display holding the Crown Jewels all at the same time.

Caught red-handed, Moriarty is impossibly acquitted, and thus begins his long game to engineer Sherlock’s fall from grace, and it gets very scary when one realizes its working.

Without giving very much of the plot away, the story moves along at a lightning pace, as Sherlock and ‘confirmed bachelor’ John Watson are forced down the twist and turns that Moriarty has created for them.

Moriarty has always been the dark side of Holmes, who has always used his deductive abilities to aid society, while Moriarty has been content to commit atrocities and serve as a ‘consulting criminal.’

Watching Benedict Cumberbatch’s Holmes and Scott’s Moriarty dance around one another is a joy. When a cast is this good you want to see them push one another harder and harder, and everybody’s game is raised as a consequence.

Seeing the faith and belief in Holmes’ abilities be stripped away and be replaced with suspicion is done so well, and so convincingly you almost believe it yourself, but we like Watson, remain every stalwart in our convictions. 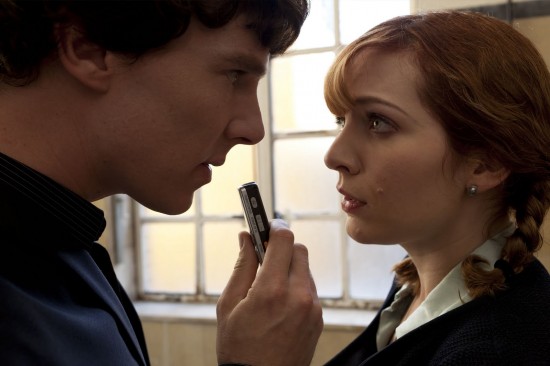 When Moriarty assumes the mantle of Richard Brook (oh! A clue!) the performance is chilling, cause part of you to think you could believe him, what if Sherlock had made it all up? And the other half knows what is lurking under that facade.

The writing is top-notch, continuing to make this version of Doyle’s creation my favorite to grace the screen. Holmes is so disconnected, cold and calculating, just as he’s supposed to be, and Watson is the best friend one could want. The one to stand by you, even after you’ve made a tit of yourself with half of the police force. He’s also willing to get arrested himself when one of the DIs goes to far. I actually cheered when I saw that scene, not something I often do with just me and Fred the Cat in the apartment.

And oh! the moments, chatting with Molly, sending John away at a crucial moment, Lestrade defending Holmes, John counseling Sherlock on how to testify, the video Moriarty makes, and as always watching Sherlock deduce!

I was also pleasantly surprised to see Katherine Parkinson, who I adored in The IT Crowd, show up in the role of reporter Kitty Reilly. Her articles start to take Sherlock down a notch or two, or more, in the eyes of the public.

The downside is it’s now a year’s wait (if not longer) for the next series! Damn you Moffat and Gatiss!!

Still, I prefer these shortened seasons as long as they maintain the quality. Cause that’s what it comes down to. Quality over quantity.

Until next year rolls around, I’ll be revisiting these chapters of Baker Street as well as the first season a few more times. I also may pull out my Complete Sherlock Holmes Adventures for a reread as well.

Just call me one of the Baker Street Irregulars.