First airing on 31 January, 2019, Point of Light was written by Andrew Coville. It sees the surprise arrival of Micheal Burnham’s (Sonequa Martin-Green) adopted mother, Amanda Grayson (Mia Kirshner) aboard the Discovery to ask for help regarding her son, Spock (Ethan Peck, still not seen), who, as we learned, is in a psychiatric unit on Starbase Five.

Or was. He has apparently escaped from the unit, and is accused of murdering some of those who worked there. A decidely un-Spock thing to do.

Meanwhile Tilly (Mary Wiseman) is having problems of her own since her investigation of the asteroid that landed her in sickbay, not to mention the spore from the mycelial network that she absorbed at the end of last season. She keeps seeing May (Bahia Watson) a long dead school acquaintance, and begins to work on the mystery surrounding it.

And for the first time this season, we head to Qo’noS to see that L’Rell (Mary Chieffo) is having her new position of power threatened, while Ash Tyler (Shazad Latif) remains at her side, which is a problem in itself because of his human appearance. A secret between them is revealed, one that must be maintained to keep her politically safe. And the Klingons have changed slightly since we last encountered them, they now have hair. It seems in this version of the Trek universe, they shave their heads in time of war.

Georgiou (Michelle Yeoh) reappears accompanied by Section 31 and Leland (Alan van Sprang), and all of it ties in with Pike’s (Anson Mount) continued investigation of the Red Signal and the Red Angel, a being that has apparently haunted Spock since his youth…

Alan McElroy and Andrew Colville pen the teleplay for An Obol for Charon from a story developed by Jordon Nardino, Gretchen J. Berg and Aaron Harberts. It first debuted on 7 February, 2019.

May places Tilly’s life in danger when she puts a plan into action for her survival, while the Discovery encounters a strange incredibly ancient sphere. Saru (Doug Jones) and Burnham are well on their way to establishing a strong friendship, as the pair face an unsettling reality for Kelpians.

It seems he has more than a cold, which Burnham helps out with, and he helps out with a virus that has infected the ship via the sphere, which messes with the universal translator and more. And surprise, surprise, part of his body’s reaction is part of a message from the sphere, and may lead to a way of solving the problem they find themselves trapped in. It will also allow his character to grow.

At the episode’s start, Pike receives some updated information on Spock, when Una or Number One (Rebecca Romijn) contacts the captain from the Enterprise. In fact this information led to a lock on where Spock will be, but the sphere pulled them out of warp, trapping them.

I like this episode in terms of character, but it’s not quite as engaging as the previous episode, though it does have a nice kind of stand alone feeling to it. While doing that, it also expands on the Kelpian nature, which not only develops Saru’s character, but also expands the backstory of his race in a new way. 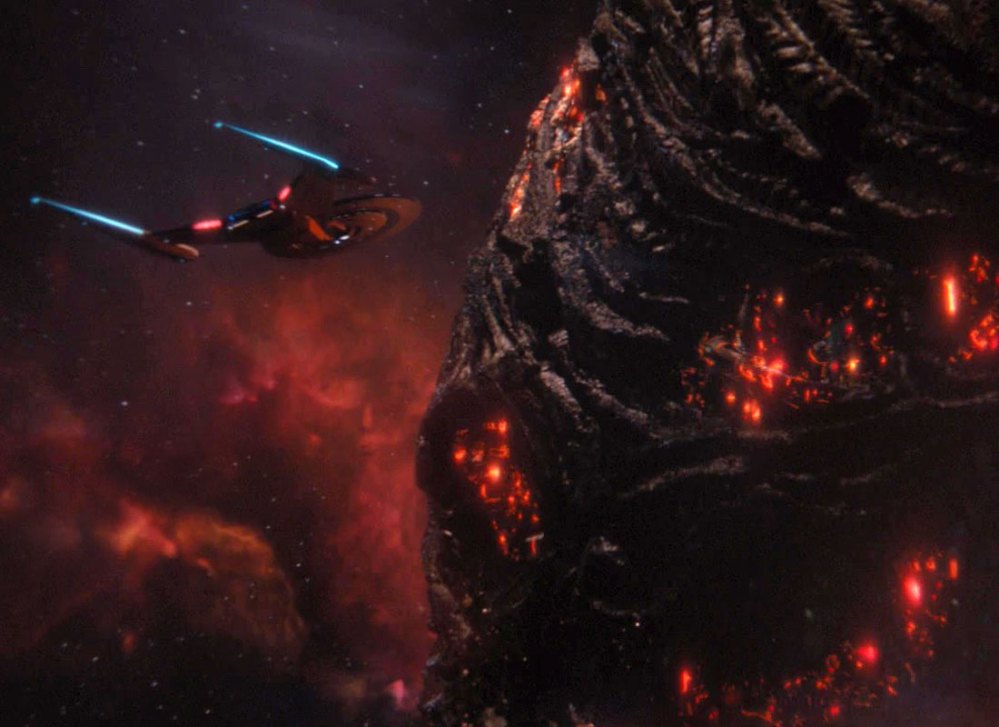