If the first season proved divisive to Trek fans, the second season upped that ante. Not only is the Enterprise on hand, but it is under command of Captain Christopher Pike (Anson Mount in a piece of perfect casting).

It seems the Enterprise has sent out a distress signal, and Pike comes aboard the Discovery as temporary captain to investigate some mysterious ‘red’ signals, that may in fact be tied into Micheal Burnham’s (Sonequa Martin-Green) missing brother, Spock (Ethan Peck, heard only in voice over in this episode).

This causes Burnham to once again wrestle with her growing up and education on Vulcan.

Their investigation into the signals leads them to an asteroid field, and a lost Federation vessel, the Hiawatha with one survivor Jett Reno (Tig Notaro), and also has a scene that delivers some solid punishment for mansplaining. During their escape from the Hiawatha, Burnham has her first encounter with the mystery of the second season, the Red Angel.

And once again, this episode allows me to argue for the Alternate Timeline theory, the Enterprise is close to what it looked like, and the uniforms are close, and while you could argue they were simply updated to keep with the look of the show, it’s just as easy to argue Alternate Timeline.

I won’t lie, I enjoyed seeing the Enterprise on the screen again in this new incarnation, and Mount’s Pike won me over from the first moment, and I was delighted when I heard he and his crew of the Enterprise were picked up for their own series (hopefully it still comes around considering the current state of the world).

So we get a season two launch, and a set up of a new arc, and some new characters mixing with those we already grew with in the first season. And I’ll be honest, from the off, it feels like the series is stronger and more settled already. 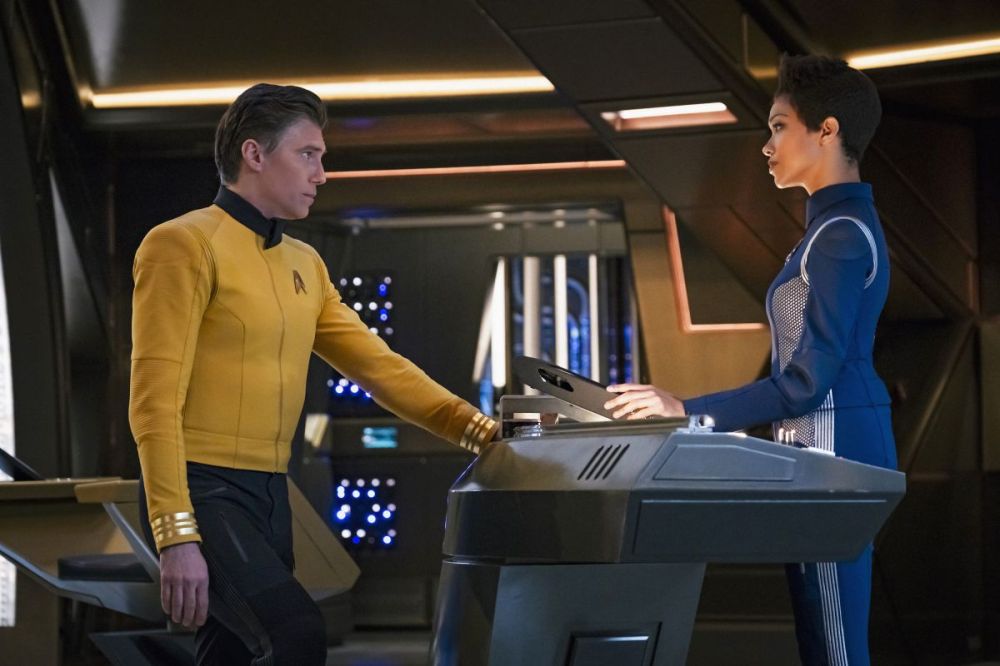 Jonathan Frakes returns to Discovery to direct again in this episode written by Vaun Wilmott and Sean Cochran from a story by Cochrane and Akiva Goldsman. It first aired on 24 January, 2019.

Stamets (Anthony Rapp) takes them through the mycelial network, despite the emotional cost, to the next ‘red’ signal, and the crew are shocked to discover what appears to be a pre-warp planet.

Beaming down to investigate, Burnham, Pike and Owosekun (Oyin Oladejo – finally getting off the bridge) are faced with a troubling ethical decision when they discover a community of humans living there.

No matter where viewers and fan stood on the subject of Discovery being ‘real’ Star Trek, this episode was arguably the closest to The Original Series, and The Next Generation, as the ship arrives at a strange planet, and their involvement with it gives rise to an ethical dilemma.

On the Discovery, things develop for Tilly (Mary Wiseman) as she investigates the asteroid fragment, which causes an accident, leading Saru (Doug Jones) and a nervous ensign, May Ahearn (Bahia Watson) to voice concern for her. Ahearn’s appearance brings its own mystery with it.

It almost feels like a standalone episode, and further cemented my belief that I wanted to see more adventures with Pike. Anson Mount plays him with humour, with an underlying gravitas and he makes such an excellent captain.

We also learn in this episode, that Pike knows where Spock is, locked away in a psychiatric unit on Starbase Five…?!

The mystery of the Red Angel continues Thursday as I explore more of Star Trek: Discovery – Season Two on bly-ray, available now from Paramount Canada.