Originally a lost silent film, The Magician is the next movie in DK Canada’s Monsters in the Movies’ chapter on Devil’s Works. A dark fantasy, tinged with horrific elements, the film isn’t quite up to today’s horror standards, and only features one truly standout sequence.

Set in Paris, the film introduces us to sculptor Margaret Dauncey (Alice Terry, wife of director Ingram) who is working on a giant creation, a towering faun, which as the audience watches, splits and tumbles down on her, burying her in rubble. She is rescued and delivered to a specialist, Dr. Arthur Burdon (Ivan Petrovich) who conducts a life-saving surgery under the observation of countless other surgeons, including fellow doctor and occultist, Oliver Haddo (Paul Wegener) – a character, apparently loosely based on the infamous Aleister Crowley.

Burdon and Margaret fall in love during her recovery, while Haddo believes he has found the missing ingredient for a spell to create life, the heart’s blood of a maiden (read as virgin). 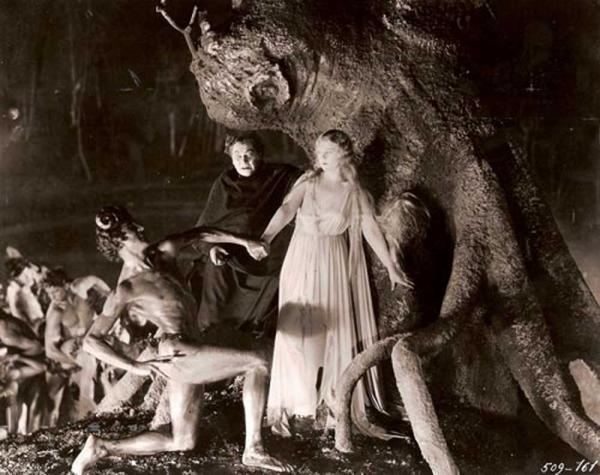 She is able to elude Haddo until her wedding day when things go sideways for the potential bride and groom, and race to a conclusion that shows that true love will overcome the forces of darkness.

Not Ingram’s best film, which for me would be The Prisoner of Zenda, it seems a but too melodramatic, which is funny, because Arthur makes a point of remarking that Haddo’s appearance is like something out of a melodrama.

If played straighter, darker, and more frighteningly, there could have been something more enduring here than just Margaret’s vision during the middle of the film, as well as the Gothic leaning of Haddo’s workspace, but beyond those moments, I found myself a little tired with the film.

I don’t doubt that upon its release the dream sequence and the threat of Haddo hanging over the heroine and her love life packed the seats with couples and thrilled them endlessly, but for me, looking back on it, there’s not quite enough in this one.

But I do love the subject matter, I love films that explore the potential of real Darkness, pulling back the veil of what we see as the everyday world, which is why, I think, I am so delighting in this chapter and these films.

But don’t take my word for it, pick up a copy of DK Books’ Monsters in the Movies for yourself and find something devilish to watch tonight!