Ian Fleming’s penultimate James Bond novel, there is one more to come, and then a collection of short stories, was the last one published before his death in August of 1964. Picking up nine months after the events of On Her Majesty’s Secret Service we find 007 a broken man.

Still in a deep state of shock over the murder of his new bride, Tracy, Bond’s work is noticeably slipping, and he doesn’t seem to care. M decides to assign him a seemingly impossible case involving intel coming out of Japan, and 007 finds the adventure more cathartic than expected, and life-changing, at least temporarily, by the story’s end.

Meeting up with the head of the Japanese secret service, Tiger Tanaka, a warm friendship is established, and Bond offers his services if it will help get his agency the intel he is supposed to retrieve.

Consequently, Tiger asks him to investigate a castle of death, that is turning into a focal point of Japanese suicides, and is run by a gaijin, or foreigner, like 007. With a cursory introduction into the secretive art of ninjutsu (Fleming’s spelling not mine) and a skin dye job, as well as a hair cut, and careful crafting of his eyebrows, Bond is ready to pass as Japanese. 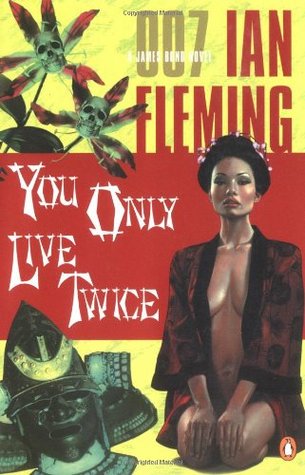 He is shipped to a tiny fishing village where he is paired with the family of the beautiful Kissy Suzuki, while he prepares for his final assault on the castle.

A castle which is filled with poisonous fauna, and dangerous reptiles, not to mention geysers of blistering hot mud. There is a lake filled with piranha, and guards at all times. And still the suicides come, allowing the keeper of the castle, a professor named Shatterhand to study the effects of his deadly garden on those who no longer wish to live.

But Shatterhand is a cover name, and even behind a new moustache, the face is completely recognisable to 007, and what was once a favour for the Japanese service becomes a mission of revenge as Shatterhand is actually Ernst Stavro Blofeld.

The story moves quickly, travelling across the length and breadth of Japan where 007 is exposed to the people and the culture, and perhaps finds a quantum of solace, and a bit of a break from the stress of his loss.

But Bond if focused now on his task, and will carry it out, no matter the cost to himself. And in this case, it seems to be a strong case of amnesia which blocks everything that has happened to him, and allows him to have a respite with Kissy in her small fishing village, while at the back of his mind, memories and words begin to stir, that can only mean one thing…