This week’s 007 book, as I continue to make my way through the series, is a collection of short stories, a number of which either have names that would be used for the film series, and are filled with familiar names and sequences as we dig into different moments in the life of James Bond.

With his usual, descriptive and punchy style, Fleming doles out five tales, four of them are actually enjoyable, that send Bond off on short little adventures.

First up is From A View To A Kill, which sees Bond dispatched to Paris, to investigate a murder that happened on the road, when a courier from SHAPE, was killed. He meets the lovely Mary Ann Russell, who works as an agent in the area, and we get some motorbike action, as well as a stakeout that leads Bond to a hidden Russian base in the heart of a French field. This one doesn’t have any parts that, to date, have been lifted for the films, though it’s definitely my favourite in the collection.

Next up is For Your Eyes Only, which along with another tale in the collection, Risico, end up with a number of moments, or ideas that were translated into the film of the same name. We are introduced to the Havelocks who reside in Jamaica. They are asked to sell their home, one of the oldest on the island. The offer is presented by Major Gonzales, who works for an interested party, and when the Havelocks refuse, they are murdered. And that’s how James gets involved. It seems M. served as the best man at their wedding, and though he is loath to use Bond for his personal use, James agrees that Gonzales and his cronies, need to be put down. So he heads to Vermont, via Ottawa and Montreal. But on the cusp of completing his job, he encounters the Havelock’s daughter, Judy, armed with a bow and arrow, setting out on revenge. I enjoyed this one as much as the first story, which is why the next story seemed such a letdown. 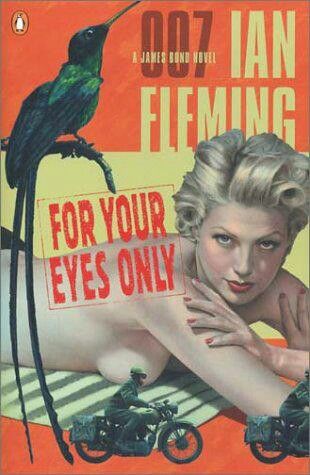 Quantum of Solace, sees Bond back in Nassau, and sharing a conversation, over dinner and drinks with a man he’s not sure he likes at the beginning, but who tells a story, and becomes a friend through the telling. The story he tells is of a man in the colonial services, who marries a flight attendant, and a bit of a gold-digger, and the horror of their marriage as it falls apart in Bermuda.  I liked references to places I know, and it allowed me to walk the lanes of my own memory, but the story itself wasn’t so great.

Risico is back on track, and much like For Your Eyes Only, this short story was lifted and adapted, almost in its entirety into the film, as mentioned above. Bond  meets with Kristatos in Columbo’s restaurant, who Kristatos refers to as The Dove. He fingers Columbo as the villain, but in fact, it is he who is the baddie, which we learn after Columbo captures Bond, using Lisl to lure him in, and having recorded his dinner conversation with Kristatos. And, of course, they sail to Kristatos’ warehouse and assault it, where there are rolls of ‘newsprint’ which are actually filled with opium. It’s almost all there,and you can see how these two stories came together to form the bones for the film, with certain sequences, names, moments, themes and plot points.

The final story, The Hildebrand Rarity takes us aboard the Wavekrest, the boat owned by Milton Krest (both of which appear in Licence to Kill) and his fifth wife. Bond has agreed to come aboard to help find a rare fish, the Hildebrand Rarity. Krest is that crass, loud, abusive type of American, which has never really gone away, and he’s not above a little domestic abuse, using the tail of a manta ray to do it. When Krest is discovered murdered, the list of suspects is short, and Bond helps clear the body, because, honestly, Krest deserved it, though when the widow Krest invites him on her next cruise, he accepts, but has some reservations.

So out of five stories, three were solid, one was alright, and one had nothing to do with 007 at all.

Still, theses are great reads, and I can’t wait to see what happens next, when James Bond returns in… Thunderball.