Chris Black and Brent V. Friedman pen this episode of the Xindi arc that first debuted on 29 October, 2003.

Archer (Scott Bakula) discovers a mining operation that seems to be compiling resources and components for the Xindi weapon that is being prepared for Earth. He, Reed (Dominc Keating) and Hayes (Steven Culp) slip down to the planet to investigate. It seems they are refining a mineral known as kemocite.

Hoshi (Linda Park) is able to confirm that the kemocite used in the attack on Earth came from this site, and Archer begins an interrogation of the refinery’s chief, Gralik (John Cothran).

Initially, Archer is set on wreaking some vengeance, even if it’s just to destroy the facility. But a conversation with Gralik reveals that not all the Xindi are involved in the attack on Earth, or are even aware of humanity’s existence. He’s a scientist, a dedicated worker.

Learning that his research, and his mineral was, and will be used again, in a weapon spurs him to action, and he agrees to help Archer. They augment part of the kemocite shipment which is about to be picked up, so that the Enterprise will be able to trace it.

Meanwhile, back on the Enterprise, Trip (Connor Trinneer), Phlox (John Billingsley) and T’Pol (Jolene Blalock) are working to understand a recovered Xindi side-arm, which almost has disastrous results.

I rather like this episode, especially when watching the Xindi story line arc in a semi-binge nature, it comes across stronger, and also shows that there are greys nuanced into it. Its not as clean cut, black and white as Archer initially thought. Not all Xindi are aware of what is going on, and some are very innocent.

But where does that leave the Enterprise in its pursuit? And it’s mission of compassion and exploration? Mike Sussman pens this Archer/T’Pol tale that first debuted on 5 November, 2003 and was directed by Robert Duncan McNeill.

Continuing their journey through the Delphic Expanse, another anomaly disrupts the ship and injures T’Pol. Unwilling to leave her behind, Archer elects to stay with her, but he in turn is struck with an anomaly that leaves parasites growing within his brain.

These parasites disrupt the ability to make new memories, and for twelve years, Archer has to be told over and over again the ultimate fate of Earth, its destruction by the Xindi, and all the horrors that followed.

The parasites exist outside of normal space-time, and therein lays the answer of how this episode will play out. It seems Phlox has finally come up with a possible treatment, after working on it for a decade, and today they will test it on Archer, aboard the Enterprise.

The episode also features some tie ins with The Wrath of Khan. Humanity’s last survivors are part of a rag tag fleet (hello Battlestar Galactica) and are stationed on Ceti Alpha V (which won’t be good in a hundred years or so when Ceti Alpha VI explodes), and the Mutara Nebula gets a mention as well.

And what an opening teaser as Archer tries to get to the bridge, only to be told that the captain has ordered him restricted to quarters, and that when he does arrive there, he witnesses the Xindi weapon destroying Earth. Better gear up, this is a fantastic episode!

There’s a bit of a reset by episode’s end, but it’s still a fantastic tale. The Human Adventure continues on Thursday when I continue my exploration of Star Trek Enterprise: The Complete Series, now available on blu-ray from Paramount Pictures. 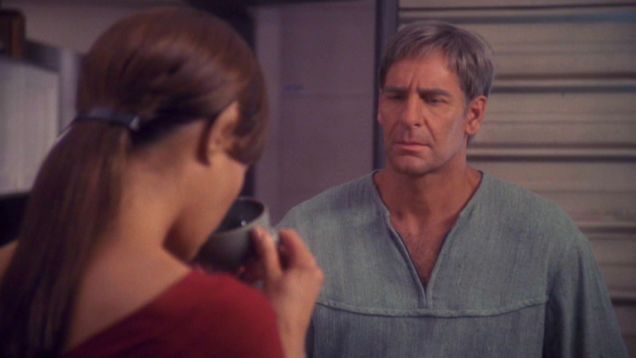