John Shiban pens this stoy that first debuted on 26 February, 2003, as I dive into another pair of episodes from Star Trek: Enterprise’s second season.

Captain Archer (Scott Bakula) and Trip (Connor Trinneer) end up arrested, for a crime they didn’t commit, and find themselves sentenced to a prison planet known as Canamar. While they are being transported there, T’Pol (Jolene Blalock) and the Enterprise crew attempt to negotiate their release.

Things get complicated when a mutiny occurs aboard the prison ship and throws the captain, and his engineer into even more trouble.

To survive, the pair will have to pretend to be outlaws, at least until they can figure out a way out, or the Enterprise gets to them.

Recognisable even under his prosthetics is character actor Mark Ralston as one of the prisoners who seizes control of the ship.

There are action beats, and the episode plays solidly, letting Trip have some comedic moments with the prisoner he is secured next to. The episode also lets both of them have some heroic moments as Enterprise works to track them down.

I like stories that pair Archer and Trip together, the actors have such great chemistry together and exude a real sense of camaraderie. And all of it plays out in a fast-paced enjoyable episode that lets us put episodes like Precious Cargo and behind us.

The episode comes to a satisfactory conclusion as Archer and Trip return home, and imply that they will investigate how many other of the arrested prisoners were there, accused of crimes they didn’t commit. 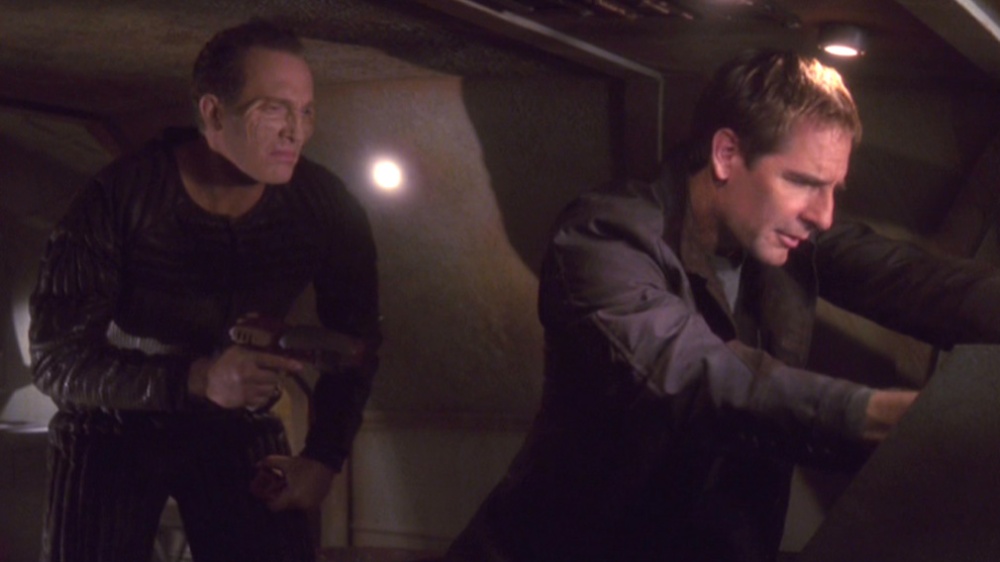 Rick Berman and Brannon Braga pen this episode from a story developed by them and Andre Bormanis. It debuted on 2 April, 2003.

A group of non-corporeal beings seize control of the Enterprise, capturing the crew with the intention of taking them over. They claim to be explorers and offer the opportunity to trade places with the crew, but they aren’t what they seem and may not return their captured crew members.

As Archer and the rest realise that the aliens are intent on keeping their new bodies, they attempt to keep them secured in quarters, and pull the rest of the crew back to the catwalk, and the auxiliary bridge created during the episode of the same name.

Happily, everything goes to plan, and the crew are not only able to reclaim their compatriots, but are also able to escape the aliens, and their rather large spaceship.

I like this episode, though it does call to mind other episodes across the Trek series.

The Human Adventure continues Thursday when I explore more of season two of Star Trek: Enterprise – The Complete Series on blu-ray.