The Skywalker Saga has come to an end. For those of us who have been there since 1977 it’s been an amazing, and emotional ride. But that doesn’t preclude the fact that it has an impact on younger viewers as well. Those new fans who discover Star Wars and take it into their hearts aren’t much different from those of use waiting for the first Kenner action figures to be released. They just have quicker access to things like that now.

DK Canada has been at the forefront of pop culture books that appeal to all ages of readers, and their new Galactic Guide to The Rise of Skywalker by Matt Jones is aimed squarely at those younger fans.

And if they haven’t seen the new film yet, don’t worry, the book remains in fairly spoiler free territory, so you can gift this to them for the holidays and not have to worry about ruining the theatrical experience when you do get a mo to take them to see it.

Jones keeps things light and fun, reacquainting us with familiar faces, both good and evil, and introducing us, briefly and with minimum spoilerage to the new characters that will help Rey, Finn and Poe on their last adventure. 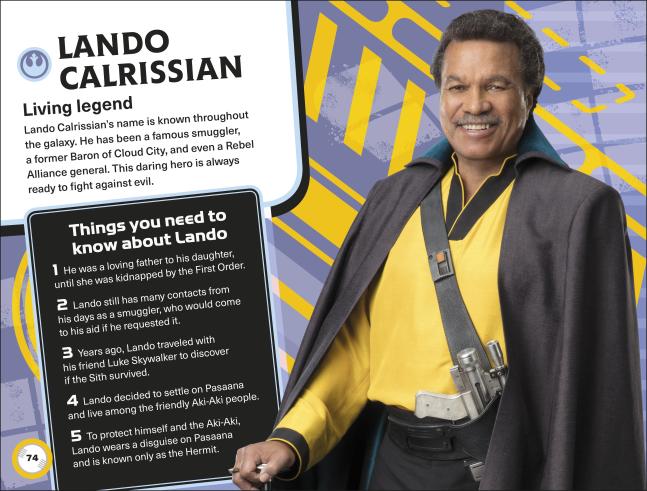 Bright colors and images make this a very kid-friendly installment on your Star Wars book shelf. It’s compact size also makes it convenient to throw in a backpack for a quick car trip on your holiday rounds. Thinking of that puts me in mind of my own holiday travels when I and my figures, as well as the Star Wars (and later Empire and Jedi) storybooks made the rounds with me (even if I was too old for them, and yes I still have them).

Jones gets that Star Wars for children especially (and some of us adults) is just supposed to be fun, and that feeling is soaked into the pages, as they are filled with an activity or two. The book is filled with fun facts that bring that sense of play that is so essential to youth and Star Wars to life.

Books like this are a great way to get kids to read. Couching facts, and fun trivia in text and pictures of things that they love are a great teaching tool, and as I’ve said in my household, I often don’t care what you are reading, as long as you read. Fire up their imaginations! And if your young ones are at home in a galaxy far, far away, this one might help make that jump to hyperspace.

Star Wars: The Rise of Skywalker – The Galactic Guide is available now (just in time for the holidays) from DK Books.

Happy Holidays to you and yours, and may the Force be with you.