First airing on 20 October, 1999 the teleplay for this Tom Paris (Robert Duncan McNeill) episode was written by Bryan Fuller and Micheal Taylor from a story by Juliann deLayne.

Unfortunately, Paris slowly becomes obsessed with it but he may in fact be under the manipulation of an alien intelligence invested in the craft – sounds like a Trek take on Stephen King’s classic, Christine.

As the craft begins to take control of Paris, Alice appears to him in person (Claire Rankin), influencing him, and she strikes out at those who would keep the pair separated. She seems to be feeding off him, draining him and Captain Janeway (Kate Mulgrew) and Torres (Roxann Dawson) are determined to save him.

There are hints of spookiness, adapted for Trek and eschewing the supernatural for science and technology, much to the same effect.

Alice has one goal, and if the Voyager crew can figure out what it is, and a way to deliver it to her, they may be able to save Tom Paris in the process. Or they may sacrifice all of it, just to save the helmsman.

It’s a fairly fun story for Tom, and has a happier ending the King’s story, that’s for sure as Torres and Paris are reunited, and the starship resumes its journey back towards the Alpha Quadrant.

Dawson directs this Tuvok (Tim Russ) episode that was written by Robert Doherty from a story by Andre Bormanis. It first aired on 3 November, 1999.

Aboard the Delta Flyer, returning from an away mission, Tuvok is attacked by a cloaked alien of a xenophobic race that leaves him neurologically damaged – he is losing his Vulcan self-control as well as his memories.

As Tuvok attempts to recover, the episode gives us time to see the unusual but enjoyable friendship between him and Neelix (Ethan Phillips).

Will the Doctor (Robert Picardo) and Neelix find a way to help restore the Vulcan Security Chief to his former self, or will he remain impaired for the duration of their trip home?

Janeway is determined to track down the aliens that did this to her friend, and find a cure, if she can. But if they find a cure, will Tuvok want to return to who he is, or will he choose to remain the person he is now?

The episode features a strong performance by Russ, and was also Dawson’s first time helming an episode.

The Human Adventure continues next week as I explore Star Trek: Voyager – The Complete Series on DVD from Paramount Canada. 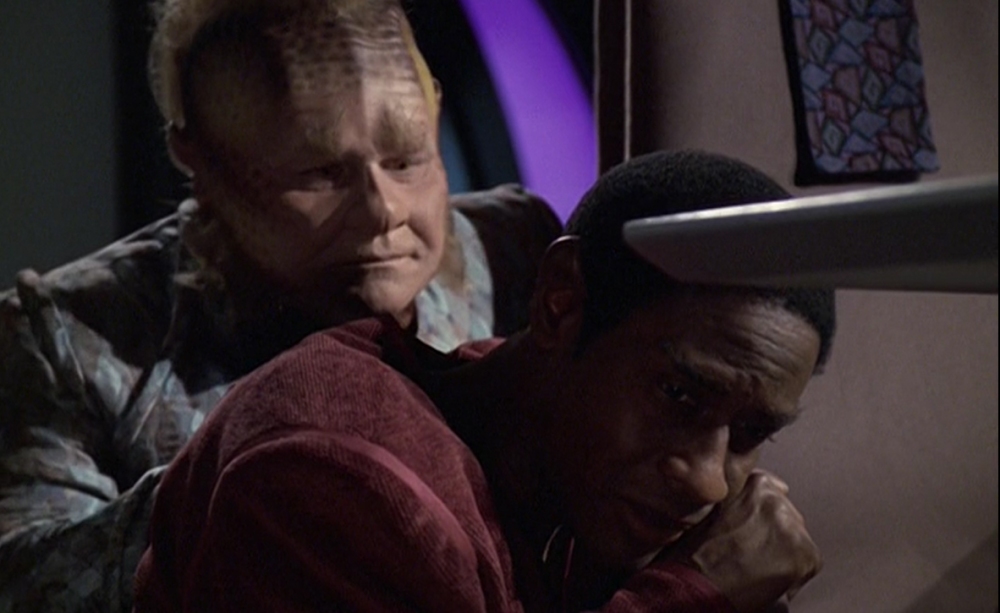