Debra Frank and Carl Sautter wrote Sleep Talkin’ Guy which first aired on 1 April, 1986, and is the first episode up this week.

David (Bruce Willis) is approached by a call girl, Toby (Lisa Blount) about one of her clients, Jerry (Steven Keats). It seems he is connected to the mob, knows a lot of their moves, where the bodies are buried, and what’s next…. with the added bonus that he talks in his sleep.

Toby shares this information with David, and an ongoing partnership is formed, and David starts racking up ‘cases solved’ impressing Maddie (Cybill Shepherd), until Toby arrives with a dangerous revelation, David is going to be the next victim of the next murder.

There are complications in David and Maddie’s relationship as it is the one year anniversary of their going into business together, and while they both agree David is entitled to a raise, neither of them agree with the other on the figure.

Consequently there’s lots of bicker and banter that fill this story, and David is acting very smug and sure of himself, but what happens when the truth comes out, as it must by the end of the episode? And despite his new found success is he enjoying himself, or do he and Maddie miss one another?

This one ha a real sense of fun to it, and lets Willis have a little bit of the limelight on his own. But by the end of the episode the duo are back together, and the partnership continues, after a fashion.

Funeral For a Door Nail features a teleplay by Jeff Reno, Ron Osborn, and Charles H. Eglee from a story by Jonathan Lemkin. It first debuted on 29 April, 1986 and sees David and Maddie caught up in yet another doozy of a case.

Maddie comes up with the idea of taking David with her to a family wedding so that she can avoid being introduced to all the single men, but she insists on paying him for his time. Something that dampens his enthusiasm for the event, somewhat, but lets him make some money.

Meanwhile, Roger Clements (Jeffrey DeMunn) receives word that his wife has died in an automobile accident. With nothing to live for, he decides to hire a hitman to kill him. All’s good right?

Nope, because when he sees his supposedly dead wife, Celia (Teri Hafford) on the street his hope is rekindled, though she disappears before he can catch up to her.

He turns to the Blue Moon Detective Agency, not to find his wife, but to stop the hitman from killing him before it’s too late. They have twenty-four hours. Can they do it?  And will they still have to go to the wedding?

The casework continues next week as David and Maddie come to the end of season two, and prepare for all new mysteries and banter when season three gets underway. 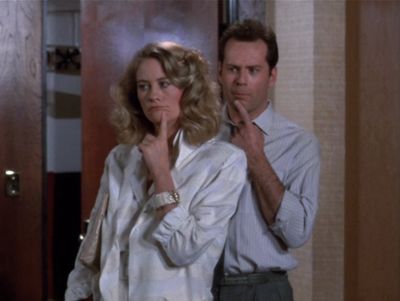