The Borg are back, but this time Captain Janeway (Kate Mulgrew) may be ready for them. In fact, she has a plan to help thee Voyager get home that much quicker. She’s developed a course of action that will allow the Federation crew to steal transwarp technology from a damaged Borg sphere.

But they draw the attention of the Borg Queen (Susanna Thompson) who has a plan of her own, get Seven of Nine (Jeri Ryan) to return to the Collective. And if she refuses… the entire crew will be assimilated.

The episode takes its time, knowing that it has two episodes to do everything, and consequently there are some nice character moments, especially Seven and her parents. We are reminded that they are exo-biologists who studied the Borg, and had in fact shadowed them in the U.S.S. Raven for two years before they were assimilated.

It’s also cool to see the crew of the Voyager taking on the Borg, in a tense sequence that sees Janeway leading an away mission to recover some technology, and causing the Borg some serious problems (with a fun reveal at the end of the bit) and then doing it again .

Course that just means the Queen is going to be more intent on exacting her revenge, and returning Seven of Nine to the fold. She has a devious plan to understand humanity before they attempt to assimilate them again, and by having Seven remain in her current state that will allow them to better understand humanity before taking them over completely – they’ve survived assault before, the Borg want to know why and how.

Seven of Nine does what she does to protect the crew, but her choice to remain on the Borg sphere troubles the captain, until she figures out what is going on, and then works to recover her crewman.

Lets just say the effects and designs are top notch, as we get a look at a whole new realm of Borg, not just cubes and spheres, but a whole floating collective, all overseen by the Borg Queen. It’s a cool image, and, lets not forget the fact that Voyager’s Borg owe so much to First Contact, their makeup and design having changed (a lot) since their initial appearance on The Next Generation.

The episode also shows us how close young Naomi Wildman (Scarlett Pomers) and Seven have become, and how much everyone has come to think of Seven as part of the crew. There are some really nice moments with Janeway (who gets some nice action beats), Naomi, and Seven – and nothing is going to stop the crew from rescuing Seven… and finding an old enemy that will dog them through the rest of the series.

it’s a great episode, and I love the fact that it was aired as a feature length episode as opposed to being broken up into two parts.

The Human Adventure continues next week with more episodes from Star Trek: Voyager – The Complete Series on DVD from Paramount Canada. 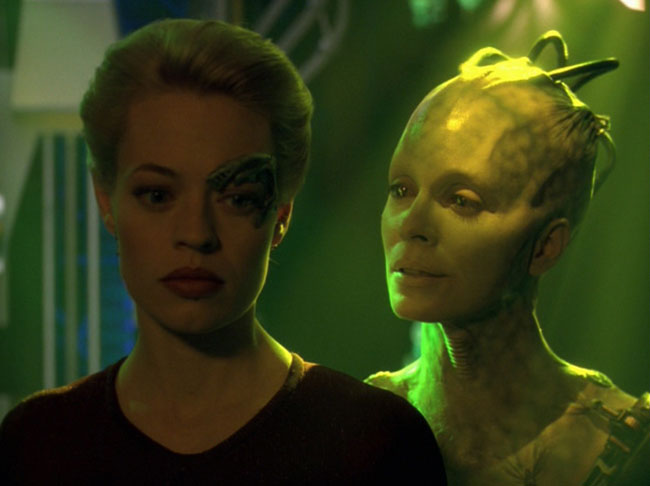