How the mighty have fallen. V The Series continues this week, and is barely recognizable when compared to the two miniseries that inspired it. It is now all about the melodrama, and has lost any of its credibility as a struggle for the planet Earth.

The Rescue was written by Garner Simmons and debuted on 1 February, 1985. With Nathan Bates (Lane Smith) now gone, Los Angeles is turned into a war zone, and the Resistance is under full assault by the Visitors.

But instead of solidifying their attacking forces the Visitors are struggling with infighting and power struggles. Charles (Duncan Regehr) sees Diana (Jane Badler) as a threat so he forces her to marry him, as their culture dictates that she must return home to bear his children.

Lydia (June Chadwick) is upset by this development, considering her own feelings for Charles, and has a plan of her own to remove Diana from the picture.

Terence Knox makes a guest appearance in this episode as a father who has seen the Resistance on television, and wants his old friend Julie (Faye Grant) to help deliver his wife’s baby… cause she’s the only doctor in the city?

The wedding ceremony is ridiculous, and why are some of the Visitors in their true skin, but the bride and groom aren’t? And how can they have a ceremonial mouse? Wouldn’t mice be from Earth only? 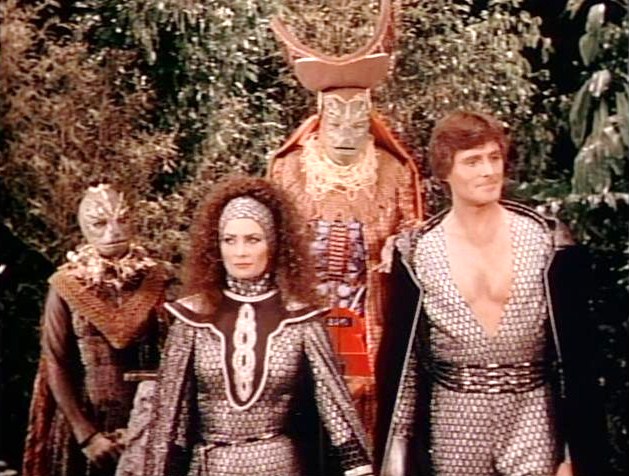 The Champion was written by Paul F. Edwards and debuted on 8 February 1985. Lydia is raced towards speedy justice for the murder of Charles with the poison that was meant for Diana.

Martin’s twin brother, Philip (Frank Ashmore) to oversee the case, and decides there isn’t enough evidence to convict Lydia, as Diana had her own reasons to want Charles dead. And so the two decide to resolve their differences with ritual combat…

… but Philip finds evidence that suggests someone else may have been involved, and orders the two combatants to look after one another until the case is finally resolved.

Meanwhile, Donovan (Marc Singer) and Kyle (Jeff Yagher) work with a local town Resistance, even if it means dealing with some less than honest local constabulary.

The show has truly fallen from what was created by Kenneth Johnson, and you can tell, just by watching, that the end is near. There are five episodes left to go, and personally with the way the stories are going, I’m kind of looking forward to it, which is sad, considering how much love I have for the two original miniseries.

This episode features a new introduction with voice over introduction, new music, new credits, and the removal of those cast members who are no longer on the show.

The battle for Earth continues for a little while longer next week, with V – The Series…