Micheal Piller writes the season opener which resolves the season two cliffhanger. Debuting on 4 September, 1996, viewers are quickly reminded that the majority of the Voyager’s crew has been marooned on a remote planet after the Kazon-Nistrim, with Seska’s (Martha Hackett) assistance seized control of their starship.

Tom Paris (Robert Duncan McNeill) was last seen fleeing in a shuttle, and now it is up to him, the murderous Lon Suder (Brad Dourif) and the holographic Doctor (Robert Picardo) to retake the ship, and rescue their fellow crew members.

Paris seeks help from the Talaxians, and there will be a lot of work for Suder before the story is done.

But they’ll have to hurry, because the Voyager’s crew aren’t alone on their planet… As Janeway (Kate Kulgrew), Chakotay (Robert Beltran) and the rest try to find food, water and shelter, the crew struggles to survive on a harsh world that they know nothing about.

The story moves along pretty briskly, balancing tense moments on the Voyager, with character beats that continue to define the series and the members of the crew. And as the episode plays out, we learn the truth of Seska’s child, and a number of characters lose their lives.

Dourif is awesome in this episode, and I’ll be sorry not to see his character again because he brings Suder to life so vividly. He won’t be the only character who doesn’t make a return appearance… Brannon Braga pens this episode that first aired on 11 September, 1996. Penned as a celebration of Trek’s 30th Anniversary this ties this series nicely into the continuity

This is a great Tuvok (Tim Russ) and Janeway story that see the pair sharing a mind meld when a suppressed memory causes a temporary mental breakdown for the Vulcan security officer.

The meld takes them back to Tuvok’s time serving aboard the U.S.S. Excelsior under the command of Captain Sulu (George Takei). Also aboard is Rand (Grace Lee Whitney) and Kang (Michael Ansara) makes an appearance.

It’s a wonderful episode, and a complete delight to watch even as Janeway and Tuvok root through his memories to find out what he has suppressed. The memories the pair find themselves happen around and after the events of Star Trek VI: The Undiscovered Country, so we get to see some recreated moments, even as Tuvok struggles with the troubling images that keep recurring.

A superior episode, and just like that season three of Star Trek: Voyager gets underway to great acclaim, and great storytelling. What happens next? I’ll have to wait until next week, when I continue my exploration of The Complete Series on DVD, available now on DVD. 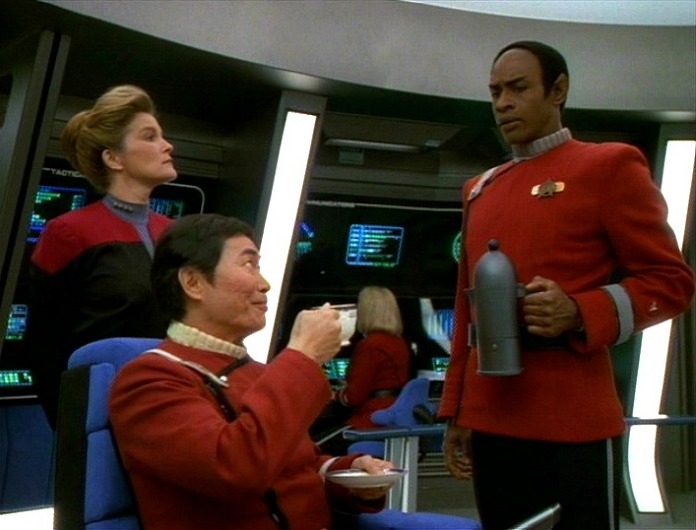