Pip and Jane Baker pen the first episode up this week, as Moonbase Alpha deals with young crushes, Tony’s (Tony Anholt) desire to perfect a drinkable beer, and a strange planet whose surviving aliens are incorporeal beings who are using a young Alphan botanist, Shermeen (Lynne Frederick) as a conduit which may result in the destruction of countless Alphans.

Airing on 8 December, 1976, this episode, takes place some 1702 days after the moon has been blown out of Earth orbit. Shermeen has a bit of a crush on Tony and has been helping with his beer-making, when Tony’s latest effort fails, he snaps at her. This hurts her more than he recognizes, as he is the focus of her crush.

She begins seeing visions of a disembodied figure calling itself Vindrus (Stuart Wilson), who makes sure she is aboard the first Eagle to investigate his strange planet.

The find a strange pyramid protected by a reptilian like alien, and stumble onto Vindrus’ plan to take over the bodies of Alphans, which would cause their death and give Vindrus and his people new life.

Koenig (Martin Landau), Tony and Maya (Catherine Schell) are the players who face off against Vindrus when he transfers his consciousness and his body into our reality, sending Shermeen into an anti-matter life.

This one, I rather enjoyed, though some of the story could have been stronger, and a little better written. And it’s sad that despite Maya’s obvious intelligence, she’s only used for shape-changing ability to come up with new and interesting ways to save the day.

The Beta Cloud was written by Fred Frieberger under the name of Charles Woodgrave, and it first aired on 16 December, 1976.

As a strange cloud drifts through space, drawing closer to Moonbase Alpha numerous crew members begin to fall ill. Within the cloud, which settles over the base, is a strange creature and a message: surrender Alpha to the cloud. It needs the resources of the base to live, and the creature within it will make sure no one on Alpha stands in its way.

As more and more people fall ill, Russell (Barbara Bain) can’t keep up with them all, or even figure out what is going on. It all may come down to Maya and Tony to confront the beast and save the moon.

I think this may have been one of the first episodes I ever saw of the series. Watching it again I recall that whatever show it was, it was very Maya heavy (I was intrigued by her character, and thought she was pretty despite the odd side burns) and there were lasers, and spaceships, monsters, and everything I was looking for in a science fiction show as a kid.

Travels continue next week with the stalwart crew of Moonbase Alpha as they travel through Space… 1999! 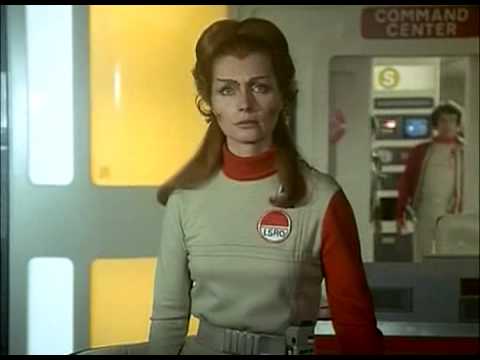