John Landis’ Monsters in the Movies from DK Canada keeps the fangs a gnashing with the next vampire title to be exhumed, Hammer Films Lust for a Vampire.

The second in the Karnstein trilogy, this story picks up some forty years after the previous incarnation of Mircalla stalked the land. This version is played by Yute Stensgaard.

The blood of an innocent is enough to draw her from the grave and a suitable nubile young woman is found. Once restored, Mircalla will have her pick of victims, men and women, as she begins to feast at an all girls Finishing School.

The school’s headmaster, Giles (Ralph Barton) is eager to become her new acolyte, and an author, Richard Lestrange (Michael Johnson), who specializes in horror tales, is also besotted with her.

Who will stand against her and those her serve her? I don’t know, but you can be sure that there will be buckets of blood, a bounty of bosoms, and a frenzy of fangs. 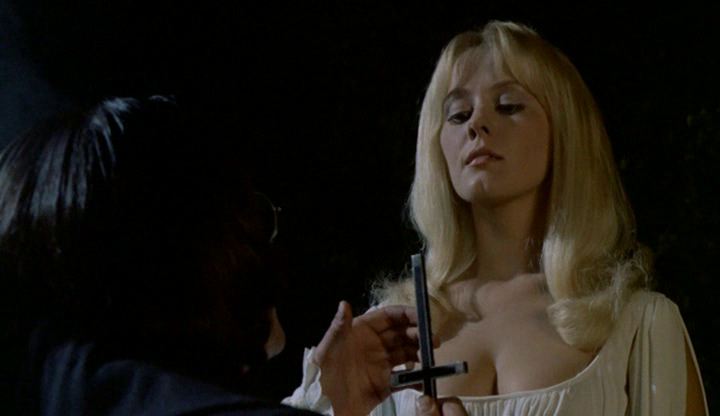 This one is a bit silly and plays up all the sexual cliches you would expect with an all girls school – especially once you throw in the author as the new English teacher, and make Mircalla one of the new students (most of whom spend their evenings in see through shifts, which also allow them to be easily disrobed) as Mircalla stalks the school. embracing her vampiric nature.

Surprisingly, Lestrange steps into the fray as main character of the piece (and probably scores some great material for a new book). Even as the evidence piles up that Mircalla is the cat amongst the pigeons, Lestrange is still drawn to her… will he be able to put a stop to her carnage, or will he fall victim to it?

And how could he not? His love scene with her includes a silly song, playing and crooning about ‘strange love’ as he seduces and woos her physically. The weird thing (besides the song) is that she lets him instead of feeding off of him.

The villagers are the ones who eventually rise up to confront the Karnstein legacy and Lestrange is finally forced to confront the true nature of Mircalla, who is apparently too in love with him (apparently the sex was THAT good) that she doesn’t want to kill him. He in turn is spared having to stake her as the castle burns down around her, and a piece of timber stakes her as it falls from the ceiling.

The Hammer Films are fun, and they aren’t afraid of blood or cleavage, but this one flounders with ineptness and just isn’t as solidly entertaining as it could be. But it was fun.

DK Books’ Monsters in the Movies is proving indispensable, and if you are a monster fan, you owe it to yourself to pick one up, check it out, and revisit some spooky friends… or maybe meet some new ones.