Micheal Caine is charming and roguish as the philanderer Alfie. Bill Naughton pens the script from his play of the same name. Popping up on the What Else to Watch list following my screening of Saturday Night and Sunday Morning for the very enjoyable The Movie Book from DK Canada.

Breaking the fourth wall on a regular basis throughout the film, Caine is perfectly cast as Alfie, who through all of his womanizing begins to understand the consequence of his relations.

There are a plethora of women at his beck and call, and he has some problems during the swingin’ 60s when one of his ladies, Gilda (Julia Foster) ends up in the family way.

Caine’s character personifies the time, and shows the time in a way that lets us view it with humor, and some pathos. But also from the distance of time, and we can be thankful for the changes that have happened since.

Gilda has the potential for some true joy with Humphrey (Graham Stark) who works the bus lines, and is very much in love with her. But she’s too hooked on Alfie, who, of course, tumbles from sexual escapade to sexual escapade. 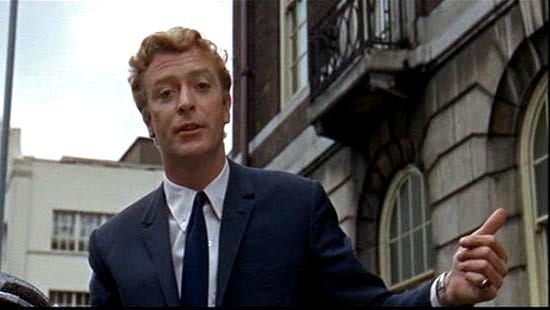 But Gilda is finally able to move on, and Alfie gets some troubling news from the doctor (Eleanor Bron) – a lady of course. The news comes in an interesting sequence as he chats with the doctor and a funeral is taking place next door.

Course once hospitalized and released again, he picks up on his old ways, and trouble follows, and it all comes down to thoughts of his son. It’s troubling the way he treats and refers to women, and in the end he gets the emotional comeuppance that eventually comes his way – when things happen again.

The script translates wonderfully to the big screen, and rests very easily on Caine shoulders, and there is some nice casting that includes Shelley Winters and Denholm Elliott.

Caine, throughout the film transitions from a jovial playboy only interested in the next bird that comes along, to an image of loneliness, an out of date man who can’t and won’t connect and then loses all because of it.

I really enjoyed this one, and Caine is just fantastic in the role. The man has, of course, become legend, and it’s performances like this that make it no surprise. There was a half-hearted remake with Jude Law awhile back, but stick to the original and watch a young master at his craft.

DK Book’s The Movie Book just keeps my cinematic education rolling. Pick one up for yourself and find something amazing to watch tonight!