Detective Sonny Crockett (Don Johnson who also serves as director of this episode) recalls his time in Vietnam, when an old friend, Stone (Bob Balaban) resurfaces with a story about some heroin that made it out of Saigon and is now resurfacing in Miami.

Back in the World was written by Terry McDonnell and first aired on 6 December, 1985.

Stone arrives in Miami seeking Sonny and his partner Ricardo Tubbs (Philip Micheal Thomas) with word that the smuggler he was tracking during the war, the Sergeant, is in Miami and he’s dealing.

The Sergeant is revealed to be one of Crockett’s superiors, Maynard (G. Gordon Liddy – yes, that G. Gordon Liddy), and the truth when it comes out may cost Stone his life. And as Tubbs runs some leads and checks, while Crockett and Stone go after Maynard, he learns that maybe Stone isn’t as clean as he claims.

I love the ending of this episode, the series continues to be hard, glitzy, cutting edge and cynical.

There’s a nice sequence in a VA hospital that portrays how Viet vets were treated when they came back to America, and how they were just starting to be accepted again.

Songs in this episode are all by The Doors, including Strange Days, The Crystal Ship, Five to One, The Spy, Roadhouse Blues, Break on Through (To the Other Side), I Can’t See Your Face in My Mind, and My Eyes Have Seen You, all of which work very well, which for me is something, as I’ve never been a big Doors fan. 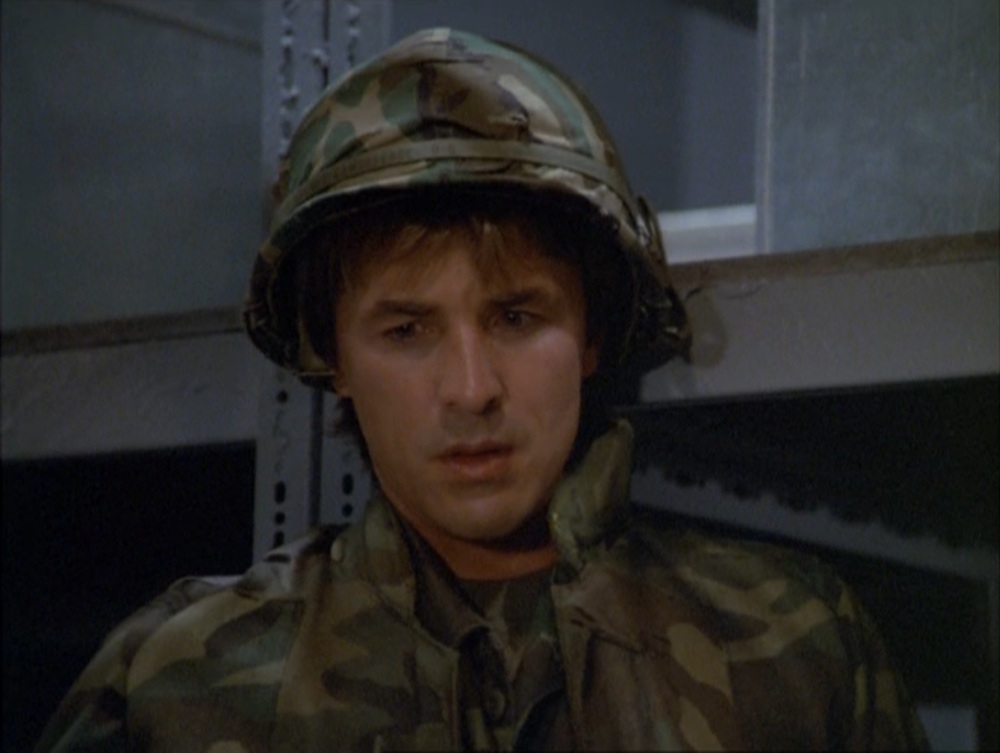 Phil the Shill features music legend Phil Collins as the titular character in this episode that was written by Paul Diamond. It first aired on 13 December, 1985.

Collins plays a dirty scamming game show host that not only screws over Switek (Micheal Talbott) catches the eyes of Crockett and Tubbs when he starts planning on diverging into cocaine.

The episode also features Kyra Sedgwick as the cocaine dealer, Rivers’ (Micheal Margotta) partner/girlfriend Sarah. Izzy (Martin Ferrero) shows up and also does his best to help the detectives bring down Phil.

Poor Phil ends up in the middle of everything, but in a rather happy note for the series Phil gets away and has a whole new schtick by the end of the episode. Sure Switek got mucked over by him, but he’s pretty likable all the same.

Music includes Life is a Rat Race by Collins, Pick It Up (and Put It In Your Pocket) by Stan Ridgway, Nausea by Executive Stacks, Rock by Day/Roll by Night by Eugene Smith, and Eric Clapton’s Knock on Wood.