It’s that time of year again, and it seems Toronto always knows what to get me for my birthday – a film festival. Specifically the Toronto After Dark film festival. Running October 11th through to the 19th the genre festival features films from around the globe that highlight horror, action and science fiction films that one may miss otherwise.

And each year they showcase some great films, and this year looks no different. Hosted by Scotiabank Theatre, the key to the Toronto After Dark festival is enjoying the films with an audience. They are all there for the same reason to get into the laughs, the beats, the blood, the scares, and the mindfucks. And this year looks to be no different.

The line up looks as impressive as always, the opening night gala is a brilliantly reviewed Mexican film, Tigers Are Not Afraid – having watched the trailer, I’m already looking forward to this one!, and the Canadian premiere of a supernatural crime thriller called I’ll Take Your Dead.

It’s Sci-Fi Night on my birthday with the films Prospect, and the Kiwi gut buster Mega Time Squad – which looks violent, doused in profanity, and damned funny,

Saturday sees the afternoon getting underway with the Shorts program, which will feature a collection of shorts from around the globe running the gambit of horror, action, science fiction, and the absurd.

And that in turn leads us right into Zombie Night featuring the much-anticipated musical horror comedy Anna & The Apocalypse, followed by the manga-based Japanese film, I am a Hero.

Sunday launches with a Canadian Shorts program, and then moves on to highlight Indonesia’s Satan’s Slaves (which looks nicely unnerving), and then we go Extracurricular a Camnadian film which looks like a murderous take on The Breakfast Club.

Monday gets you double Scene points and you’ll be wanting to cheer for the lion in Prey, which comes from Holland and features a lion stalking Amsterdam. It’s paired with Canadian film Robbery, which features Art Hindle, my friends Tara Spencer-Nairn, and Samantha Herman, who serves as one of the film’s producers.

Tuesday looks like a fun night with a copro from Mexico and Chile – The Inhabitant which delves into possession, exorcisms, and what looks like a robbery gone wrong. It’s backed with the Canadian film, Lifechanger which ventures into body-swaps, body-horror and serial killer territory.

Wednesday enters slasher territory with The Ranger – a group of punks head into a park for some fun, only to be stalked by an unhinged ranger. It’s followed by The Dark, an Austrian-Canadian copro which looks stunning, and adds a unique teen spin on the genre.

Thursday brings us the German film, Luz, a dreamlike take on possession, it’s joined by the anthology film, Nightmare Cinema which features work by directors Joe Dante and Mick Garris alongside others.

Closing night on Friday begins with the much talked about, JJ Abrams produced Overlord, a WWII monster actioner, and You Might Be the Killer featuring Fran Kranz and Alyson Hannigan.

You can check out the full line-up and get tickets here.

There’s lots to see this year, and I will do my darnedest to cover as many as I can, but what are you seeing Toronto? After Dark. 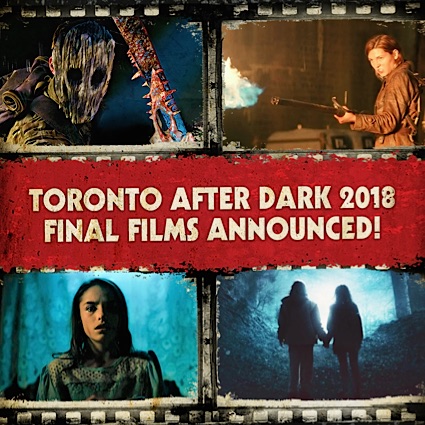