Ring Around the Moon is the first episode up this week, as I continue my travels with Moonbase Alpha. Written by Edward di Lorenzo this story first debuted on 15 January, 1976.

A strange yellow energy field has an adverse effect on one of the Alphan techs, as a strange planet pulls it into temporary orbit. It possesses him, and attempts to hijack Computer before Koenig (Martin Landau) and Russell (Barbara Bain) intervene.

The planet has a unique look, it’s a glowing yellow with what appears, at times to be a brain with an eyeball at its centre glaring out at the universe. The planet is Triton, and it’s next subject will be Russell. It will use her as an informer and observer, even if it kills her.

But when they attempt to investigate the planet all investigations, and Eagles are turned away, causing Alan’s (Nick Tate) Eagle to crash on the lunar surface. This is the opportunity that Triton needs to seize Russell and possess her, in a rather minimalist yet nicely unnerving sequence.

Koenig and Bergman (Barry Morse) puzzle over the planet, and try to figure out how to find Russell, and what sort of threat the energy barriers pose to them and the moon.

When Koenig and Bergman realise that even Russell hasn’t seen the aliens, and that there is no real physicality to them, just energy, they come to a realisation, and a plan. If they can pull it off in time, they may save the doctor, and themselves…

Missing Link was also written by di Lorenzo and first debuted on 22 January, 1976.

Koenig and Alan’s Eagle crash land on a trip back to the moon, the commander’s soul/spirit is captured by the nearby planet Zenno. They are curious about him, examining his being as he seems to be the missing link in their evolution.

Meanwhile, his body, recovered by Russell and a medical Eagle along with Alan and the rest of the crew are taken back to Alpha, where they try to bring the commander back to awareness.

On Zenno, Koenig encounters the extraordinary Peter Cushing in the role of Raan, and falls in love with Vana (Joanna Dunham) even as Raan and his cadre of scientists perform experiments on him, including the illusion that he is back on Alpha.

There’s a bit of Star Trek’s The Cage going on here, including some rather frightening imagery.

Koenig tends to be more scientific and cerebral than Trek’s Pike and doesn’t have the same level of charm as the Starfleet captain.

While Koenig’s spirit struggles on Zenno, Russell fights to bring restore him, and command of Alpha seems to be in question as tensions rise among the crew.

It finally comes down to Koenig to make a choice, and the moon’s journey continues through Space… 1999. 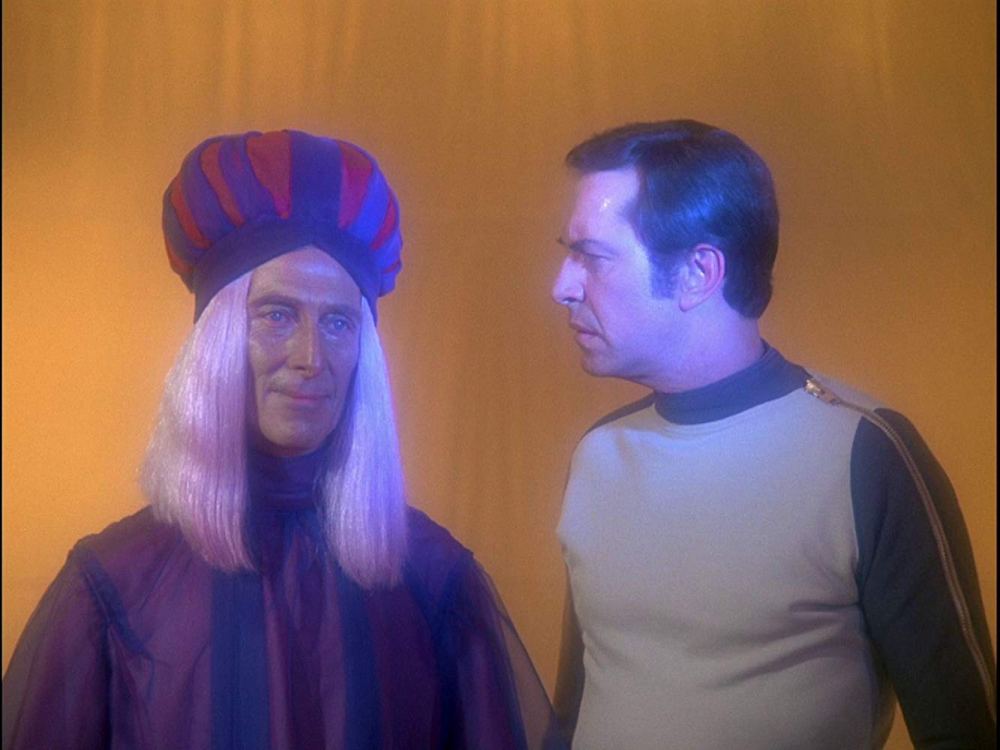